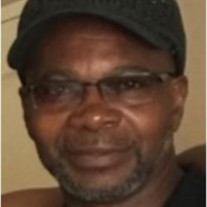 On April 4, 2021, Easter Sunday, Timothy Dewayne Owens (age 63), a loving husband, father, brother, uncle, grandfather, and friend, unexpectedly passed away at the UPMC Presbyterian Hospital in Pittsburgh, Pennsylvania. Timothy, affectionately known as Tim, was born on November 4, 1957 in Toledo, OH to Annie Mae Redfern-Owens and Edward Lee McCoy Sr. Tim attended and graduated from Jesup W. Scott High School where he obtained his High School Diploma. As a teenager, he attended the Upward Bound Program at the University of Toledo where he later attended as a student and received his degree. He also participated in and received a degree from R.O.T.C, which prepared him for college. At a young age, he confessed his life to Christ and in his most recent years, he became a member of the Usher Board at his home church. Tim was married to Robin K. Owens for over 20 years and we'd often hear of the many traveling adventures they took together. Tim was a great entrepreneur and he owned and operated many businesses which included an auto-mechanic shop, a cleaning business, a carpet cleaning business, a trucking business, as well as owning properties. In between owning businesses, Tim also held careers with companies such,Raceway Park, Roadway Trucking, where he was a truck driver for many years, and most recently he held a contract job with Regional Local 207 as an Asbestos Worker. He was an extremely hard-working man. Tim also created a youth program where he coached football and basketball for over 10 years. One of the kids Tim mentored, who was nicknamed Pee-Wee and who recently went off to college, continuously thanked Tim for creating a program for under privileged children, in which PeeWee called his safe haven. Tim was passionate about many things such as fishing, placing bets at the raceway track, going to the casinos, watching sports on TV, working on cars, making updates to his homes, cooking and BBQing, and he adored spending time with all of his grandchildren. He was a friendly man who always spoke to everyone he knew, and a stranger could quickly become his friend. Tim was known for attending everyone's funeral (because he knew so many people). He was known for his quick sense of humor, his contagious and most brightest milliondollar smile, kind and giving heart, being a hard worker, and for being very protective of those he loved. He was the most intelligent and knowledgeable man, with a big heart and loving, compassionate spirit. Timothy was preceded in death by his mother Annie Mae Redfern-Owens, his father Edward Lee McCoy Sr. and brother Kenneth McCoy. He leaves to cherish his legacy and loving memory, to his loving wife, Robin K. Owens, five children Timothy Owens Jr.,Shawndra Owens, Sharnell Owens, LaShondra Carpenter, Iesha Austin-Owens, stepson Ronald L. Piggee Jr. and his sixteen grandchildren.To his brothers Alton (Barbrett) Owens, Anthony (Tony) Owens, Gregory (Lisa) Owens, Kevin (Angela) Redfern, Edward Lee McCoy Jr., Robert (Joana) McCoy; to his sisters Theresa Owens, Shiela Owens, Evelyn (Tina) Gilbert, Marilyn Jernigan, and a host of nieces, nephews, cousins, other relatives, and friends. Repass will be at the Knights-Columbus Banquet Hall-4256 Secor Road.

The family of Timothy D. Owens created this Life Tributes page to make it easy to share your memories.

Send flowers to the Owens family.