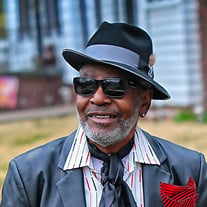 Stephen Pierre Coker Sr. was born January 5, 1942 in Decatur, Illinois. He was nurtured and lovingly reared by his parents, George Coker, and Minerva Sweet. He was united in holy matrimony for 41 years to Patricia Ann (White) Coker and was a loving husband and father to their five children. Stephen departed this life surrounded by his loving family and friends on Wednesday, June 14, 2017. Stephen attended of Edward Drummond Libbey High School where he met his wife. Though celebrated for his world class boxing abilities, Stephen’s employment career largely began in 1982 as a drug case manager at three different locations: Toledo Hospital, Substance Abuse Services, Inc., and the Drug Abuse Outreach Program. Through the SASI Program he met then City Council President and future mayor of Toledo, the late Jack Ford. Mr. Ford was quoted in a 1994 article written about Stephen’s contributions to the community by saying, “He is one of those rare guys who reaches a point where his greatest joy is doing things on behalf of the community.” His work helped people from all walks of life throughout the years by warning them of the dangers of drug addiction. Stephen was no stranger to the challenges that life can bring, sometimes taking for granted God’s blessings. Those challenges proved as much 15 years ago when Patricia, the love of his life, passed away. Stephen Pierre Coker, an already good man became an even greater man. He was a role model for the community, his family, especially his children, grandchildren, and great grandchildren. Showing them how to lead and take pride in their accomplishments, even if they stumble along the way. The way he carried himself at all times to be that example in the community has solidified him as a living legend. He leaves to cherish his loving memory, his loving sons, Stephen Jr. (Shawna), Gregory (Tanya) Coker of Ontario, CA; daughters, Dana Blalark, Melody (Mark) Harvey, Monica Coker and honorary daughter Linda Coker; 12 grandchildren Marquest, Brittany (LaShawn) Shaw, DaNa, David, Daniel, and Danielle, Aaron, Akeem, Sierra, Savon, Falynn, Asher, Alicia, and Caleb, Niani, and Naysha, Gavin (Jie Zhou), and Garrett (Ashley); sisters, Sandra Simmons, Beverly Willis; brothers, Wendell, Dawson (Patricia), Tyrone (Willa Mae), William, Eddie, and Ricardo Coker; hosts of nieces, nephews, and other relatives and friends. Visitation 4-7:00 pm Friday @ Dale-Riggs Funeral Home Chapel Wake 10:00 am Funeral 11:00 am Saturday at Glenwood Lutheran Church 2545 Monroe Street Interment Historic Woodlawn Cemetery

Stephen Pierre Coker Sr. was born January 5, 1942 in Decatur, Illinois. He was nurtured and lovingly reared by his parents, George Coker, and Minerva Sweet. He was united in holy matrimony for 41 years to Patricia Ann (White) Coker and was a... View Obituary & Service Information

The family of Stephen Pierre Coker Sr. created this Life Tributes page to make it easy to share your memories.

Send flowers to the Coker family.