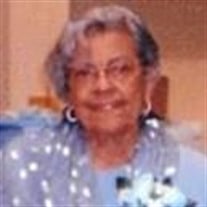 Shirley Mae Carter Chapman Ware was born on November 19, 1936 in Toledo, Ohio to Virginia and Walter Carter. She left this earthly life on April 24th, 2019 at Promedica Toledo Hospital after a long illness. She worked as a Teller for the First National Bank for 11 years. On May 25, 1973, She married the Reverend Albert Charles Ware, then pastor of the Eastern Star Missionary Baptist Church in Toledo, Ohio. Mrs. Ware was Treasurer of the United Missionary Baptist Association and participated in community organizations such as the Council of Churches and the Executive Board of the Toledo branch NAACP. She moved to Buffalo N.Y. when her husband became the Pastor of the Greater Friendship Missionary Baptist Church. Her church activities took her to the Local, District, State, and National levels; while receiving several proclamations including one from the Mayor of Buffalo, NY.. After the passing of her husband, she became employed by the Buffalo Board of Education as a Teacher Aide and Library Assistant. In October 2006, she moved home to Toledo, uniting under watch care with Indiana Avenue Missionary Baptist Church, Rev. John E. Roberts, Pastor. She was a member of the Mother's Board, inducted into the Indiana Avenue Missionary Baptist Church "Hall of Fame" May 2012. She loved volunteering with The African American Legacy Project. She leaves to mourn her sister, Lillian Truss of Toledo, Ohio. Her previous marriage to the late McKinney E. Chapman Jr., blessed her with three children, Venus R. Chapman, Antoinette Chapman, McKinney E. Chapman III. This union also blessed her with special son, Anthony L. Reams; four grandchildren, Tehran Davis, McKinney E. Chapman IV, Iesha Chapman; adopted-daughter/Granddaughter Dayaira Ware; eight (8) great-grandchildren and a host of family members and friends. A Memorial Service will be held on Tuesday, April 30th at Indiana Avenue Missionary Baptist Church from 6p to 8p. Funeral Services will be held in Buffalo, NY at Greater Friendship Missionary Baptist Church on Friday May 3rd at noon.

Shirley Mae Carter Chapman Ware was born on November 19, 1936 in Toledo, Ohio to Virginia and Walter Carter. She left this earthly life on April 24th, 2019 at Promedica Toledo Hospital after a long illness. She worked as a Teller for the First... View Obituary & Service Information

The family of Shirley Mae Carter Chapman Ware created this Life Tributes page to make it easy to share your memories.

Send flowers to the Ware family.