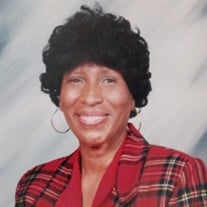 Shirley Marie (Martin) Clay, age 82, was born on August 12, 1938, in Evergreen, Alabama, to the late Edward Martin Sr. and Mary (Lyons) Martin. She passed away on January 1, 2021 at First Community Village in Columbus, OH. Shirley graduated from Conecuh County training school in 1955 and would go on to attend Alabama Agricultural and Mechanical (A&M) University in Normal, Alabama. She graduated with her bachelor's degree in 1962. After briefly living and teaching in Hogansville, Georgia, Shirley moved to Toledo, Ohio, in the mid 60’s to be with family and to advance her career. In 1971, Shirley found love and married Richard Arthur Clay. From that union they would have two boys, Derrick Ryan and Jeffrey Lamarr Clay. Shirley loved being a mother but also wanted to continue her career in the classroom. She continued her career path and taught in the Toledo Public Schools system for over 30 years with the majority of those years being spent as a first grade school teacher. Shirley loved the classroom and was dedicated to her students until her retirement. After her teaching career, Shirley moved to Columbus, Ohio, in 2003 to be closer to her sons and grandchildren. Prior to moving to Columbus, Shirley was a faithful member of Grace Presbyterian Church in Toledo, Ohio. She was a loyal member of the church choir and would often be the soloist on any given Sunday. She loved the Lord, her church family and as a solid believer in Jesus Christ, her faith sustained her until her last days. Rooted in service, Shirley was a member of Delta Sigma Theta sorority. She pledged and crossed the Delta Delta chapter in 1961 on the campus of Alabama A&M University. Shirley, known to some as “Mot” was a devoted mother, grandmother, daughter, sister, aunt and friend. She dedicated her life to being a wonderful mother to her boys and being there for her family. Over the years Shirley enjoyed many different things including listening to music, solving crossword puzzles and spending time with her grandchildren. However, anyone that knew Shirley well knew that she enjoyed entertaining the most. She was an excellent cook and hosted the best parties for her family and friends. During the holidays or any festive occasion, Shirley made sure that the Clay household was the place to be for some great food and drink,her signature banana pudding and the biggest smile and laughter she could muster. She is preceded in death, by her husband Richard A. Clay, parents Edward Martin Sr. and Mary Lyons Martin, sister, Mary Eunice Boykins, brother Frederick Martin, uncles Sumpter, Robert and Thomas Martin, aunts Rebecca, Hattie Lou, Rosie and nephew Myron L. Boykins. Shirley leaves to cherish her memories, sons, Derrick R. Clay (Sydnee), Jeffrey L. Clay, grandchildren Kennedy L. Clay, Kole J. Clay and Ethan T. Seward-Godfey of Columbus, Ohio; brother Edward Martin Jr. (Verdell) of Gallatin, TN; aunts Levornia Peters of Castleberry, AL, Estella Tuitt of Queens, NY, nieces Marcia Allen, Michele Boykins of Columbus, GA; nephews Keith Martin (Sarah) of Calera AL, MSG (RET) Marvin “Shane” Boykins II of Sumpter, SC; great nephews Andrew Martin, Vincent Allen II; great nieces Mariah Allen, Tatyana Guidry, Kyra Woodberry, Ashley Martin; one great great niece, two great great nephews and a host of other family and friends.

The family of Shirley Marie Clay created this Life Tributes page to make it easy to share your memories.

Send flowers to the Clay family.