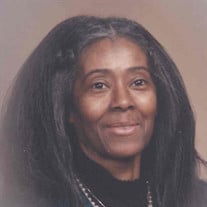 Naomi F. Neal, 85, of Toledo, Ohio, passed this life on Wednesday, November 29, 2016 at the University of Toledo Medical Center. She worked for AT&T before retirement in 1985. Affectionately known as Mother, Naomi was born September 30, 1931... View Obituary & Service Information

The family of Naomi F Neal created this Life Tributes page to make it easy to share your memories.

Send flowers to the Neal family.