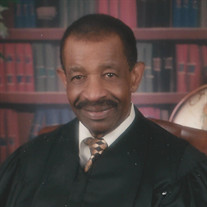 Judge Robert W. Penn died at the age of 93 on April 30, 2015, hand-in-hand with his devoted daughter and compassionate caregivers in hospice after a seven-week illness. Judge Penn served on the Toledo Municipal Court bench from 1984 to 1995, and subsequently as a visiting judge until the mandatory retirement age. He was considered by prosecutors and defense lawyers to be one of the most astute and erudite judges to sit on the bench. From time to time Penn encountered a former defendant who thanked him for his strict sentencing and it pleased him to hear that he turned his life around. Robert Penn was one of nine children born to the deeply spiritual Roswell and Nellie Floy Penn in Athens, AL who instilled a love of God in their children by attending church regularly as a family and contributing financially and with service. The son of a well-respected sharecropper, Penn credited his longevity to the sixty miles he walked each week to attend Trinity School, a private missionary school initially established in 1865 to educate former slaves, but subsequently played an important role to educate blacks denied a public school education by the State of Alabama after the sixth grade. He attended Tuskegee Institute and enrolled in ROTC, but a shoulder problem prevented him from becoming an officer. He enlisted and served five years in the U.S. Army, including several years in the European Theater as a logistics and supply sergeant. After spending three years in a military hospital in Denver, Penn was honorably discharged with a service-connected disability, which ultimately contributed to his death. He returned to Tuskegee to complete his Bachelor of Science degree in Agriculture, but was determined to leave the South, in search of the respect he experienced during his military service in Europe. After his discharge, he moved to Toledo where his brother Paul lived. He bought a grocery store on Ironwood and Girard on Toledo's East Side, which he and his brother operated together. Determined to pursue a career in law, he applied to the law school at Western Reserve (now Case Western Reserve University). After graduating in 1953, Penn and classmate James B. Simmons, III, the son of Toledo's first black councilman, joined the elder Simmons' law firm, located on the second floor of an office at City Park and Indiana. Six years later, Penn opened his own law office. During his 31 year law practice, two attorney members of his firm, Joseph Flores and Charles Doneghy, subsequently became judges. Active in public service, he served as Chief Legal Counsel for the NAACP during the late 1950s and 1960s, President of the Civil Service Commission of the City of Toledo from 1971 to 1984, and member of the Administrative Board of Zoning Appeals from 1962 to 1978, and its president for five years. When he was appointed to the Municipal Court, he sold his law firm to another future judge, C. Allen McConnell. Penn also nurtured and mentored recently retired Federal Magistrate Judge Vernelis Armstrong and his law clerk, Myron Duhart, a current Lucas County Common Pleas Court judge. In addition to his many civic-minded appointments, board memberships, and affiliations, Penn faithfully served Grace Presbyterian Church as an elder. He also loved the arts and served as president of the Toledo Opera Association and board member of the Toledo Symphony. In September 1954, Robert Penn married the love of his life, the former Mary Louise Cowell of Toledo and enjoyed nearly 57 years of blissful matrimony until her death in 2011. He was a loving husband and referred to her as his soul mate. He is survived by their only child, Crystal W. Penn of Philadelphia, PA, and dearly loved siblings, Hattie Wall and Charles Penn of Huntsville, AL, Paul (Delores) Penn of Toledo, and Oliver (Minnie) Penn of Dayton, OH, several cousins, and many beloved nieces and nephews, and a host of special friends, dedicated caregivers and colleagues. He joins his siblings who predeceased him, Roswell Penn Jr., Evelyn Martin, Gloria Hall, and Nellie Floy Penn. Funeral services will be held at Grace Presbyterian Church at 11 a.m. on May 12 followed by interment in Ottawa Hills Memorial Park. A wake will be held from 5-8 p.m. at the Dale-Riggs Funeral Home on May 11. There will be no viewing. In lieu of flowers, the family requests that donations be made to Grace Presbyterian Church, or to the Robert, Mary, and Crystal Penn Fund at the Toledo Community Foundation which supports organizations which meant the most to him.

Judge Robert W. Penn died at the age of 93 on April 30, 2015, hand-in-hand with his devoted daughter and compassionate caregivers in hospice after a seven-week illness. Judge Penn served on the Toledo Municipal Court bench from 1984 to 1995,... View Obituary & Service Information

The family of Judge Robert W. Penn created this Life Tributes page to make it easy to share your memories.

Send flowers to the Penn family.