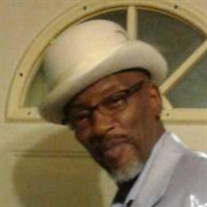 Jerry Taylor at the age of 66 succumbed to injuries sustained in an automobile accident at Toledo Hospital on January 23, 2021. Jerry was preceded in death by parents Robert and Inetta Williams, (biological father), Aurther McGhee, siblings, Robert Jr. and Jeffrey Williams. We leave to embrace his life in remembrance; wife, Ramona Pitts-Taylor, sons, Louis Stroude and Demetrius Bernard and 10 grandchildren, siblings; Bessie Mack, Charles (Earlene) Williams, Rose Smith, Larnell Williams, and Linda Williams and many relatives and friends. Jerry's story is not an easy one to tell. A complicated man with a range of emotions seemingly always waring inside of him, but with that silly crooked grin he so easily fixated onto his face, masked over it all. What we do know; Jerry was a veteran and was honorably discharged. Jerry was an excellent swimmer and at a young age had won many awards in competitions through the Girls and Boys club, YMCA, and from the various parks that had swimming pool, mainly City Park. Jerry was a natural born artist and craftsman when he put his mind to it. Jerry could build clocks; renovate homes and he had mastered calligraphy penmanship in a blink of an eye. His entrepreneurial spirit was always in flight. It did not stay landed for long before he was off to the next project. He loved to fish, like his younger brothers Robert jr. (Baba), and Jeffrey. We could never figure out how mom managed to have the oldest brother and youngest brother share the same birth date, Jan. 9th, but she did it. 17 years apart. Bowling was another of his favorite pastime, and you could always find him on a league here in town. You might have even seen him showcased on BCSN as they televised the bowling matches. His eye for coordinating an outfit was unmatched. From the top of his head with his matching dobb hat to whatever color he was wearing down to his shoes, Jerry was immaculate. He loved to dress up in his clothes. Jerry united with Spring Street Baptist Church, Toledo,Ohio and was dedicated to helping with the community outreach ministry. It is wonderful to know that he had a strong relationship with his son’s, and they remain in contact with one another. No matter how well or how little one truly knew Jerry Taylor, we can all rest assure that God knew him best.

Jerry Taylor at the age of 66 succumbed to injuries sustained in an automobile accident at Toledo Hospital on January 23, 2021. Jerry was preceded in death by parents Robert and Inetta Williams, (biological father), Aurther McGhee, siblings,... View Obituary & Service Information

The family of Jerry Taylor created this Life Tributes page to make it easy to share your memories.

Jerry Taylor at the age of 66 succumbed to injuries sustained...

Send flowers to the Taylor family.