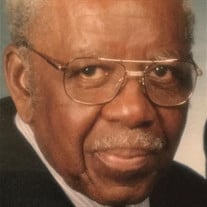 Jake C. Slaughter was born July 25, 1923 to Jeff and Julia (Orange) Slaughter in Merigold (Sunflower County), MS. Slaughter moved to Toledo, OH in 1946 after serving from 1942-44 in the US Army during WWII. He was stationed in Charleston,... View Obituary & Service Information

The family of Jake C. Slaughter created this Life Tributes page to make it easy to share your memories.

Send flowers to the Slaughter family.