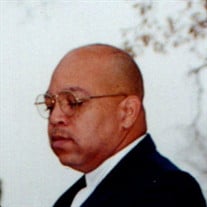 Edward Cole “Eddie" Ellis II., was born to the union of Odia M." Toni" (Newson) and Edward C. Ellis I. on Sunday, August 8,1954. Eddie professed his faith and accepted CHRIST at an early age, while living in Toledo. His parents preceded him in death. He graduated from Pickett Elementary and Edward Drummond High Schools in Toledo, Ohio. He also participated and enjoyed playing Football, Basketball and other extra-curricular sports. Eddie was a retired Fire Fighter, EMT Paramedic, First Responder of Toledo Ohio, for 28 years! He was well known in the communities of Toledo for his services! When in residence at the Fire Stations...he was known for his Culinary Skills. His TFD Family affectionately called him” Fast Eddie!" As an adolescent, he had a passion for music! Eddie organized a neighborhood band, in which he was Lead Vocalist and played various instruments. In 1997, at The Music Factory Studio, he recorded as AKA: "EE: (Double E) his first CD: "DOLLAR GREEN CADILLAC!" The year of 2002, Eddie recorded: “ALL I NEED." The drum set at MT. NEBO MISSIONARY BAPTIST CHURCH in Toledo, was generously donated by Eddie. In October of 2010, after retiring, Eddie, Diana "Ann" and Poochie relocated to Bowling Green, Kentucky. It was within a few years after that, his health started to decline. He departed this life on Sunday, April 18, 2021, in Bowling Green, Kentucky, in the presence of his loving devoted wife Diana of 38 years and his son Ed III. Eddie's leaves life memories to his wife Diana "Ann” of Bowling Green, KY; son Christopher Harris (Vickie) of Birmingham, AL; daughter Eryka (Ellis) Threats (Johnathan) of Clarksville, TN; son Edward C. Ellis III. Of Toledo, OH; sisters Linda (Ellis) Ramsey and Brenda Ellis of Toledo OH; Special Protector and Loyal Companion Poochie of Bowling Green, KY; 15 grandchildren, including special grandson Marshawn Ellis; 2 great grandchildren; nieces, nephews and a host of cousins, relatives and other friends.

Edward Cole &#8220;Eddie" Ellis II., was born to the union of Odia M." Toni" (Newson) and Edward C. Ellis I. on Sunday, August 8,1954. Eddie professed his faith and accepted CHRIST at an early age, while living in Toledo. His parents preceded... View Obituary & Service Information

The family of Edward C. Ellis II created this Life Tributes page to make it easy to share your memories.

Edward Cole “Eddie&quot; Ellis II., was born to the union of Odia...

Send flowers to the Ellis family.