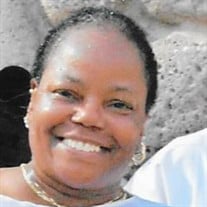 Darlene McKinney-Williams also known as Dee Dee was born March 8, 1953 in Toledo, Ohio to the union of Deacon James H. McKinney Sr. (Diddy) and Lola B. Connor-McKinney. Darlene transitioned from this life on March 22, 2022. Darlene was preceded in death by Deacon James H. McKinney, Lola ConnorMcKinney, husband: Thomas (Tom) Williams, son: Ohnshea Lavel McKinney, brothers: James H. McKinney Jr., Danny (Boochy) McKinney, Lee Arlin (DR) McKinney, sisters: Dorothy McKinney-Simms, Bennie Ruth McKinney–Nettles and Leatha Mae McKinney–Mitchell. Darlene graduated in 1972 from Jesup W. Scott High School where she excelled in her studies making the honor roll two years in a row. She was a familiar face to all there as Darlene worked in the office and collected the attendance. Darlene worked several jobs in high school and after she graduated she worked for General Mills, Owens-Illinois and Hamilton Scale Manufacturing Company. Darlene had a soft heart and loved helping the less fortunate, the sick and feeding the homeless. She was faithful in her calling to always be of service and respect all people. She was a friend indeed to lots of people that depended on her warm friendly smile, her kindness and generosity. Darlene was always seeking to lift up others’ spirits in prayer or in a conversation hoping to provide a ray of hope for them and a better outlook on life. Darlene had a love for animals, she grew up with animals and as an adult began to breed dogs. She was somewhat of an entrepreneur as she had other businesses, websites and an online prayer ministry (non profit) called “Standing in the Gap.” In her ministry she shared scriptures, prayed for many, prayed with many people and sent out prayer requests all over the world. The most favorite of all was the script shirt ministry that she shared with her two sons Ohnshea and James (who also were very talented with the script shirts) where they did shirts with scriptures on them. And the online prayer ministry which she was lead to co-found with a friend in Oklahoma. She was definitely a prayer warrior, an intercessory prayer from the heart. Darlene never took credit for anything; she always gave credit to Yahweh and in the Holy and sacred name of Yahshua. She help convinced multitude to pray one for another all over the world via the “Standing in the Gap Ministry” which also requested prayers from all over the world. Darlene’s favorite sayings were “be blessed indeed”!!!!! “hung by the tongue and fear and faith cannot abide in the same place at the same time. Darlene found herself at the death beds of at least five lost souls, leading them to Yahweh, always thinking of others salvation. She also laid hands on. Darlene loved to usher, she also was a Sunday school teacher and an usher which she loved them all. One pastor called her an evangelist but titles meant nothing to her. As a matter of fact, they made her uncomfortable so she avoided them as much as possible. Darlene could walk into a room of strangers and walk out with a room of friends as she was very friendly and outgoing. Anyone that knew Darlene knew a very special person, a person that loved to say I love you and a person that had a hug, smile and made you smile and / or laugh from the belly. Darlene was very helpful to those in recovery, and those that had mental health issues. She was a regular at the Zepf Mental Health Center where she attended groups sessions with those recovering from alcohol and drugs, as she was recovering also. She counseled many on how she turned her life around. She had a glow and a light that shined and made those that knew her before ask, what is this? Darlene gave her life over to Yahshua at a very early age where she attended services at The Church Of The Living God, The Pillar, Ground And The Truth” at 415 Indiana Avenue under the watchful eyes of Pastor Doretha Warren, Bishop Carol, Assist. Pastor, aunt Rosana Hill and not to mention Deacon and Sister McKinney, kept their eyes on Darlene as well as the other children. She was introduced at a very young age to performing on Sunday nights, singing to the beat of her dad, Deacon McKinney beating the drums. She also loved to lead in hymns. Her favorite songs were “Walk With Me Lord” and Jesus Hold My Hand”. She loved hearing her name called by Sis. Freddy, who affectionately called her up to sing by saying “and now a solo from little Sister Darlene McKinney. Darlene also loved to sing with her friends Dee Dee Hendricks, Darlene Floyd and Debra McKinney, they were known as the harmonizing four. They didn’t just sing they enjoyed it and gave their all. Her favorite scripture as an adult was Mark 11:22-26, her favorite books was the whole of Proverb and Psalms. Darlene retuned to the church after a long absence on Mother’s Day of 2006 along with her brother DR. She began to usher and loved it very much. Darlene leaves to mourn her son, James Ray McKinney (Macon, GA), brother, Ezra Lee McKinney (Toledo), and she was the loving grandmother of (7) Latisha C, (Fremont), Jameia M. (Toledo), Marcus Q. (GA), Naketa Rea(Toledo), James R. Jr., Alissa and Ian (Alabama) and great grandmother of (1) Navarea’ Amir’ (Fremont), along with a host of family and friends. She will be greatly missed. Darlene gives a special thanks to a very special friend and play sister Marcella Pryor-Brown and Kwasi Pryor for all of their support. Weep not for me but rejoice in knowing that I knew my Savoir. To all of you in attendance I say to you “Be Blessed Indeed!!!!!” In the Holy and sacred name of Yahshua!

The family of Darlene D. Williams created this Life Tributes page to make it easy to share your memories.