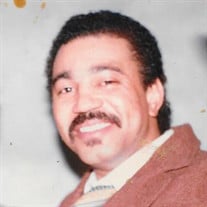 Willie Mack Bailey, A.K.A. Stoney, age 66 passed away peacefully at home with The Lord by his side on Thursday, February 1st, 2018. He was born in Belle Mina, AL on September 22, 1951 to the union of Ollie and Almeta Bailey. At the age of 17, Willie left Trinity High School and enlisted in the U.S. Marine Corps. He proudly served in the Vietnam War as an E-4 Corporal, Cpl. and after being honorably discharged in 1971 he moved to Toledo, OH. Willie was employed at Chrysler, Consumer Powers, Woodies Maintenance, and was an avid Tractor Trailer Operator until he retired in 2008. At the age of 11, Willie accepted Jesus Christ at The New Heaven CT CA of Belle Mina, AL; He joined United Vision Baptist Church, Toledo, OH in 2015 and was always quick to discuss God via scripture and/or life’s events. Willie didn’t believe in anyone being a stranger. He would stop and talk to anyone about anything. Family was always first. His greatest achievement was seeing his children become adults and then, gaining the title of “grand-dad/pappy”. He would remind you that he was an elephant because he remembered everything and would make sure that you also remembered. Willie enjoyed bowling, socializing, reading, watching sports, history, Christian programing, and movies of every sort. He was a jack-of-all-trades; there was nothing that he would let defeat him. He will always be remembered for his “sayings” and his distinct way of getting his point across. Willie was a fighter. This spirit was embedded in him at a young age and he utilized it daily. He has now WON the ultimate prize of peace. He was preceded in death by his parents; brothers Leo and Jim, and sisters Ollie Mae and Anna Louise. Willie leaves a legacy of AGAPE LOVE to his children, Cynthia (Tom) Rice of Toney, AL, Kimberly (Eddie B.), C’ne, Matthew, and Michael (Celenna) all of Toledo, OH. His essence remains in his grandbabies, J’kari, A’vyanah, T’my, Kaelynn, Mychal, Jordan and Tamia. His remaining family includes, sisters Lois Bailey of Belle Mina, AL, Barbara Miller of Birmingham, AL, Doris Miller of Athens, AL, and Johnnie Mae Booker of Belle Mina, AL; brothers Thomas Miller Jr. of Belle Mina, AL, and Stephen (Phyllis) Miller of Madison, AL and a host of nieces, nephews, cousins and extended family. The children also want to express gratitude to his special friend, Hyacinth. The family will receive guests at the Dale-Riggs Funeral Home Chapel, 572 Nebraska Avenue, Toledo, OH on Friday from 5-8pm. The family hour will be Saturday at 12:30 p.m. followed by funeral services at 1:30 p.m. at Warren A.M.E. Church, 915 Collingwood Blvd., Toledo, OH, Officiant The Rev. Stanley E. Clark, Sr. Condolences and memories can be shared at www.dalefh.com. Special thanks to the staff at The Veterans Administration of Toledo, OH and Ann Arbor, MI, and The Mercy Health Heart and Vascular Institute. SEMPER FI; ALWAYS FAITHFUL

Willie Mack Bailey, A.K.A. Stoney, age 66 passed away peacefully at home with The Lord by his side on Thursday, February 1st, 2018. He was born in Belle Mina, AL on September 22, 1951 to the union of Ollie and Almeta Bailey. At the age of... View Obituary & Service Information

The family of Willie Mack Bailey created this Life Tributes page to make it easy to share your memories.

Send flowers to the Bailey family.