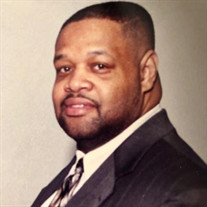 William Isaac Edmondson, III, affectionately known as Ike, was born to the late William Isaac Edmondson Jr. and Mabel Edmondson, in Toledo, Ohio on March 31, 1956. He was educated in the Toledo Public School system, graduating from Jesup W. Scott High School in 1974. He was united in Holy Matrimony to Lisa Brown Edmondson on August 16, 1992. One son, William Isaac Edmondson IV, was born to this union. Ike was employed by the Kroger Company for Sixteen years, and held other positions, before attending Toledo Barber College and becoming a licensed Barber in 1992. He was employed at Liddell’s Barber Shop for several years, until beginning his career with the Lucas County Sherriff’s Office, as a Correction Officer, in July 1997. Ike retired from the Lucas County Sherriff’s office in 2017, after 20 years of service. Brother Edmondson confessed his love for Christ and united with the Eastern Star Missionary Baptist Church, under the leadership of Pastor John W. Williams in 1992, where he had an opportunity to serve on the Trustee Board and served as the Pastor’s personal Barber for many years. He said, he wanted to cut the Pastor’s hair at the Church, so the Pastor wouldn’t have to endure “shop talk”. Brother Edmondson adored his wife and son, had a soulful voice, loved singing, and was described by all who know him as a tenderhearted, kind-spirited man until departing this life on Tuesday, February 9, 2021 at Mercy Health – St. Vincent Medical Center. He was preceded in death by his Parents and Brothers – Tyrone Woods and Melvin Dent. His memory will be cherished by his wife, Lisa Edmondson; Son, William Isaac Edmondson, IV; Brothers, Michael Dent and Jerome Edmondson; Sisters, Tracey (Denver) Price and Pam (Kermit) Phillips; Stepbrothers, Royce Evans and Mark Lance Evans; Stepsisters, Harolynn Evans and Lori Ballard; Father-in-law, Rodney (Doris) Brown; Mother-in-law, Joyce Quinn and a host of other relatives and friends. In lieu of flowers, the family prefers donations be made to Eastern Star Missionary Baptist Church “In Memory of Ike Edmondson”. Using Givelify at https://giv.li/6sj7ew or by selecting Eastern Star Missionary Baptist Church, Toledo, OH; or mail to: Eastern Star MBC, 2102 Mulberry ST., Toledo, OH 43608.

The family of William Isaac Edmondson III created this Life Tributes page to make it easy to share your memories.

Send flowers to the Edmondson family.