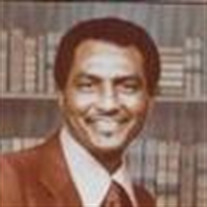 Will Roy Catchings, affectionately known as "Bracey", took his first breath on April 6, 1935 and his last on April 16, 2018. Born to Marie Kitchens and Robert Bracey in Florence, MS, his beloved grandmother, Florence Kitchens Phezell Played a significant role in his upbringing and held a special place in his heart to the end. He attended McLaurin High School and was married to his high school sweetheart, Lola Mae Cannon for over 50 years until her death in 2007. Seeking employment, Will moved to Chicago in his early twenties where he was surrounded and supported by his maternal aunts: Lee Gertha Phillips (deceased), Mary Evelyn Hayes, and Sandra Delores Catchings. He later moved to Toledo where other maternal aunts: Alma Taylor (deceased) and Curtis Taylor provided loving guidance and support. Mississippi remained home in his heart. Will was a hard worker all his life, from the fields of his family home to years of employment including Midland-Ross (formerly Unicast), Joseph's and Foodtown grocery stores, and Saxon Wire Products. Will was baptized at an early age at Good Hope Baptist Church in Florence where he sang in a quartet. He joined and attended Mt. Pilgrim Baptist Church for many years after moving to Toledo. Although he did not regularly attend church in later years, Will epitomized many of the Bible's teachings on generosity, forgiveness, empathy for others, as well as a strong work ethic. He and Lola strived to instill these and other values in their children and grandchildren. One of his favorite phrases was "Every man for himself and God for us all". Anyone familiar with Will knew him to be an honest, loyal, straightforward southern gentleman who would never start a fight but didn't mind ending one. He was adamant about respecting the rights of others and insisted on receiving his due respect. When not working, Will's passion was taking care of his yard and garden. Progressive in his thinking, especially concerning African American entrepreneuralship, Will was involved in several enterprises, including briefly owning race horses, buying and selling cattle, and being one of a group of ten men invested in businesses along Door Street, including Black Giant grocery store and Black Giant Appliance Center, as well as two gas stations. In addition to those previously noted, Will was preceded in death by his wife Lola Mae, son David Christopher, and brother John Sampson. He leaves the following to cherish their memories of him: daughters, Valerie Ann King and Lolita Marie Cooper (James); son, Roy Fitzgerald Catchings (Trecia); grandchildren, Charles Fredrick (Ebony) Camille Monique (Mike), Alexander Roy (Chrissy), Brett Fitzgerald (Stephiniea), Chelsea Jo'nae Crutcher (Brandon), and David James Spencer; great-grandchildren, Cameron Andrew, Jordan Reese, Charles Fredrick Jr., Mikaili Lillie, Caleb Elijah, Kaia Jo'nae, and Kendall Annalise; sisters, Suzanne Vikstrom of Hollywood, CA and Johnnie Mae Young of Chicago, IL; many extended family members, including cousin Millard Catchings who both regarded the other as a brother; and numerous friends. The family expresses sincere gratitude to all who have shown concern and provided various forms of support and comfort during these last days, as well as during Will's long battle with Alzheimer's disease. A special thanks to the following: Hospice of Northwest Ohio, Spring Meadows Extended Care, UTMC physicians and nurses, Parkcliffe Alzheimer's Community, MemoryLane Care Services, caregivers: Chris Ferguson, Abby Saville, Alison Crossen; and of course, grandson Alex Catchings who provided ongoing support and also serves on the MemoryLane Care Services Board of Directors where he routinely advocates for and lobbies on behalf of Alzheimer-related issues. The family asks that any contributions be made in Will's memory to MemoryLane Care Services, 2500 N. Reynolds Road, Toledo, OH 43615. Visitation will be Saturday, April 21, 2018, 10:00 a.m. followed by funeral services at 11:00 a.m. Dale-Riggs Funeral Home Chapel. Interment Historic Woodlawn Cemetery. www.dalefh.com

The family of Will Roy Catchings created this Life Tributes page to make it easy to share your memories.

Will Roy Catchings, affectionately known as &quot;Bracey&quot;, took his...

Send flowers to the Catchings family.