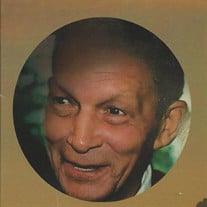 Wilbur Beverly Marshall, Jr. was the youngest son of three born on September 13, 1924 in Toledo, Ohio to Wilbur B. Marshall, Sr. and Hazel Duffy Marshall. He graduated from Scott High School in 1943 where he excelled in varsity basketball. After graduation Wilbur met Rowena Mae Roberts at a Sunday school convention at Warren AME Church. He later went on to attend Bluefield State College in West Virginia where he continued to play and excel in basketball until he was drafted into the Armed forces in June of 1943. While in the Army during World War II, Wilbur served as a medical technician overseeing the training and implementation of emergency first aid services. Before his honorable discharge in March of 1946 Wilbur was assigned to serve on a malaria control team teaching classes on prevention and control of the disease. Upon return from the war Wilbur reconnected with Rowena and made her his bride for the next 70 years on June 8, 1946. Before they started their loving family, Wilbur re-enrolled in college attending the University of Toledo where he pledged Kappa Alpha Psi Fraternity, Inc. From the union of Wilbur and Rowena, three wonderful children were born, Wilbur “Rick”, III; Warren “Steve”; and Pamela. Wilbur worked for 30 years at St. Vincent Hospital and retired as a medical technology supervisor. Post retirement he continued to work at Pathology Labs as well as at his son’s dental practice well into his 80’s. He was a lifetime member of All Saints Episcopal Church where his service began as an acolyte in his youth, and a active member of the congregation serving on the Usher Board, Men's Group and supportive of many fundraisers. He was an avid golfer enjoying many competitive games with his sons, friends and family who lovingly referred to him as “Pops”. The highlight of his career on the links was when he hit a hole in one at the Ottawa Hills golf course in 1988. A strong man, who adored his wife and loved his family with kindness. His one of kind voice matched his one of a kind smile. To his grandchildren, he was Grandpa but to his great grandchildren he was “Papa the Great!” Great he was to all his family, as one of the most generous, selfless and loving persons expect when it came to playing Connect 4. He was a true example of how a man should love and provide for his family. Wilbur was preceded in death by his parents & Sister Hazel Verletta Bowman (California). He leaves behind to cherish his memory, his devoted wife Rowena Marshall; his children Wilbur B. Marshall, III (Jackie) of Las Cruces, New Mexico; Warren S. Marshall (Brandy) of Toledo, Ohio; Pamela M. Holmes (J. Stefan) of Cleveland, Ohio; a special friend of the family Monica Majors; 9 grandchildren Michelle Tani; Darrin Marshall; Sha’Ran Marshall; Shana Marshall; Shannon Marshall; Heather Holmes; Chase Holmes, Kimberly Marshall; Stevie Marshall; as well as 16 great-grandchildren; his sister Lillian Kyser; and a host of nieces, nephews; family and friends. On Sunday, July 17th, 2016 Wilbur passed away peacefully with a smile surrounded by his family with love. Visitation 5-8:00 pm Friday @ Dale-Riggs Funeral Home Chapel Wake 10:00 am Funeral 11:00 am Saturday @ All Saint's Episcopal Church Interment Ottawa Hills Memorial Park.

Wilbur Beverly Marshall, Jr. was the youngest son of three born on September 13, 1924 in Toledo, Ohio to Wilbur B. Marshall, Sr. and Hazel Duffy Marshall. He graduated from Scott High School in 1943 where he excelled in varsity basketball. After... View Obituary & Service Information

The family of Wilbur Beverly Marshall, Jr. created this Life Tributes page to make it easy to share your memories.

Send flowers to the Marshall family.