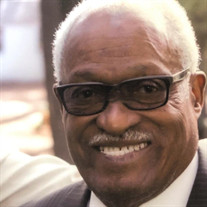 A Meaningful Life Thomas Jefferson James, Jr., was born on October 4, 1936, the second of nine children born into the union of Mary Alice Gillespie James and Thomas Jefferson James, Sr., in Starkville, Mississippi. Thomas shared a very close and special bond with both of his parents and each of his siblings throughout his entire lifetime. Thomas was affectionately known by his parents, brothers and sisters as “Jr.” and to all who knew and loved him as “TJ” or “Tommy”. The Lord called Tommy peacefully home on Tuesday, October 1, 2019, where he will continue to guide and watch over us. Thomas accepted Christ at an early age and was baptized at Ebenezer Baptist Church. Thomas received his formal education at Oktibbeha Training School Class of 1955 before moving from the South to Toledo, Ohio, in 1956 where he joined members of his immediate family, especially his maternal Grandmother, Senora Gillespie and a host of great uncles, aunts and cousins who had traveled north before him. Toledo quickly became a second home to Tommy. He immediately joined his family’s church, Friendship Baptist, where he became an active and lifelong member. Important also to Tommy was building a foundation of employment, family, and friendships that would span and last all the days of his life. Anyone who knew Tommy is aware of his strong and unshakable faith in The Lord and his deep love and commitment to family, especially his children, grandchildren and great-grandchildren. There was nothing more important to him. On October 7, 1961, Thomas married Patricia Florence Reece at his family’s home on Lincoln Avenue in Toledo, Ohio and to their union three children were born, Felicia, Steven and Tanya. Thomas and Patricia were deliberate to raise their children with the knowledge and love of The Lord, close bonds with their grandparents and family, with attention to education and particularly to character. Throughout the years, Thomas was employed by Doehler-Jarvis where he worked construction before joining the management team of The Toledo Blade. During his tenure, Thomas was voted in as the Blade’s first African American Union Steward, a position he was quite proud to serve for years. After many years in the world of print, Thomas joined his brother John’s company, James Group International, along with his brother Louis and his Uncle Calvin Outlaw, in Detroit, where he worked until his illness would no longer allow. Tommy often described these as his proudest working years. Tommy was fortunate to find love a second time around, and on November 10, 2001 he married Donna J. Moore by candlelight service at Friendship Baptist Church. Tommy and Donna would spend years together enjoying family, traveling, entertaining and an abundance of memories that will be cherished forever. Donna served as his health advocate during his extended illness and an absolute General among his many soldiers as he fought his last fight. Tommy was a man you could always count on. He was a man of conviction and honor with the biggest heart and the best sense of humor. Tommy was a devoted husband and outstanding father and grandfather, and a hero to many. Deeply rooted in his community, Tommy served as a father to many young women and men within and outside of his family unit. Tommy always kept his word and would do whatever he could to help another human being. Tommy was a lover of sports that included both cooking to tailgating for Detroit Lions home games and attending the Super Bowl as an annual tradition with his brothers. He loved a good meal, a good cigar, a good shot of Grand Marnier, a good laugh and a great conversation; however, there was nothing in this world he loved more than the Good Lord and his family. Tommy enjoyed life to the fullest and he will be deeply, deeply missed by all who knew and loved him. Tommy was preceded in death by his loving first wife, Patricia James; both parents; his brother Clark James (Cynthia) of California, and his sister Mary Lynn James McGee of Mississippi. He is survived by his loving wife, Donna J. Moore James; Children, Felicia James of Toledo, OH, Steven James, Sr. (Dionne) of Toledo, OH, Tanya James Mayes (Raymond) of Toledo, OH; Stepdaughter, Carla Fitzgerald of Toledo, OH, Stepson, Dennis Turner (Meggie) of Spokane, WA. He is also survived by his siblings, Robert W. James (Fayetteville, NC), John A. James (Sharon) of Detroit, MI, Louis E. James (Pam) of Chicago, IL, Dolores James McCarroll of Starkville, MS, Sandra C. James of Atlanta, GA, and Shirley A. James Hanshaw of Starkville, MS. He is also survived by beloved grandchildren, Patrice James, Giovanni James, Steven James, Jr., Nicholas Talley, Randy James, Patricia Mayes, Lillian Mayes, Christian Fitzgerald, Chase Fitzgerald, Addyson Turner, Kyson Turner, six-great grandchildren and a host of other loving relatives and friends. Visitation will be held Sunday, October 6, 2019, from 3-7:00 p.m. at Dale-Riggs Funeral Home, 572 Nebraska Ave, Toledo, OH 43604. Funeral Services will be held Monday, October 7, 2019, at Friendship Baptist Church, Bishop Duane Tisdale, Pastor, 5301 Nebraska Ave, Toledo, OH 43615 with Wake Services at 10:00 a.m. and a traditional service at 11:00 a.m. with Interment following at the Historic Woodlawn Cemetery.

The family of Thomas Jefferson James JR. created this Life Tributes page to make it easy to share your memories.

Send flowers to the James family.