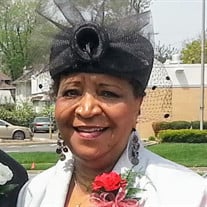 Mrs. Tempie Ruth McConnell, daughter of Lillie Ruth Turner and the late Reverend James Clifford Turner, was born on May 2, 1944 in Hampton, Georgia. She grew up in Bluefield, West Virginia, attended the public schools of Mercer County, and was a graduate of Park Central High School. She completed Bluefield State College in 1966 with a Bachelor’s Degree in Business Education. She later earned two Master’s Degrees in Education and in Guidance Counseling from the University of Toledo. She was united in holy matrimony to Judge C. Allen McConnell, Sr. on May 27, 1965. This union was blessed with two children, C. Allen, Jr. and Karyn McConnell and two grandchildren, LJ and Lauryn Hancock. She was a most loving and devoted wife, mother and grandmother. Tempie was an active member of the First Church of God in Toledo since 1968 where she faithfully served as a Deaconess, Superintendent of Sunday School, co-Pastor of Light of the World Congregation, Chair of the Education Committee where she honored the graduates every June, Officer in Women of the Church of God, Four Corners Tutoring Program, and Vacation Bible School. She taught at Crittenton Girls School, Libbey High School, and Rogers High School. She served in Adminstration at Macomber High School, Byrnedale Junior High, and Woodward High School. She ended her career as a Crisis Counselor for the Scott High School feeder schools and retired from Toledo Public Schools in 1998. We are still constantly approached by her former students expressing their love and gratitude for the lasting impact that she had on their lives. In the community, Tempie was a member of numerous organizations including: Alpha Kappa Alpha Sorority, Inc. (Spring ’63), Girlfriends, Inc., YWCA of Northwest Ohio Board of Directors, Goodwill Industries of Northwest Ohio Board of Directors, Botanical Gardens Board of Directors. Her influence will forever remain in the lives of all who knew her. She peacefully departed this life on June 9, 2020 at her home in Toledo, Ohio with her loving husband by her side. She was preceded in death by her father, Reverend James Clifford Turner, her sister, Barbara Turner, and brothers, James Turner and Randy Turner. Her beautiful life will forever be cherished in the lives of her husband, Judge C. Allen McConnell, Sr.; children: C. Allen McConnell, Jr. of Columbus, OH, and Karyn McConnell of Toledo, OH; two grandchildren LJ and Lauryn Hancock of Toledo, OH; mother: Lillie Ruth Turner of Kingsport, TN; brothers: Brady Turner of Columbus, OH and Lester (Jolita) Turner of Chillhowie, VA; sisters: Leila (William) Latta of Columbus, OH, Ruby Gaylord of Morristown, NJ, Dorothy Partridge of Columbus, OH, Susie Turner of Columbus, OH, and Janet Parks of Kingsport, TN; sisters-in-law: Margaret Turner of Kingsport, TN, Lucy Turner of Martinsville, VA, Doretha Nowlin of Columbus, OH, Lorraine Brower of Spring, TX, Pauline McConnell of Bramwell, W. Va., and Geneva McConnell of Newark, NJ; and a host of devoted nieces, nephews, cousins and friends.

Mrs. Tempie Ruth McConnell, daughter of Lillie Ruth Turner and the late Reverend James Clifford Turner, was born on May 2, 1944 in Hampton, Georgia. She grew up in Bluefield, West Virginia, attended the public schools of Mercer County, and was... View Obituary & Service Information

The family of Tempie Ruth McConnell created this Life Tributes page to make it easy to share your memories.

Send flowers to the McConnell family.