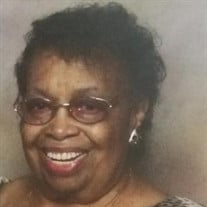 Savannah Ketchum, age 97, passed away peacefully in her home on Tuesday, May 12, 2020. Affectionately known as “C.B.” aka “Chicken Butt” by her friends and family. Savannah was born March 6, 1923 to James and Louise McDaniel in Port Huron, Michigan. She grew-up in Springfield, Ohio with her older sister and brother-in-law; Airy Katy and Ollie Drake, who helped to raise her and her siblings after their parents passed away from Tuberculosis. She moved to the Toledo area in the late 1940’s and shortly thereafter, began her thirty-five years career at Toledo Hospital, as a Nurse’s Aide. After, retiring in 1984 from Toledo Hospital, Savannah enjoyed helping raise her grand-children and taking care of her family. She enjoyed crocheting and making quilts which she gave to her friends and family with love. Savannah was a member of The Institute of Devine Metaphysical Research Organization in Southfield Michigan. In 2019, she received her Doctrine Certificate from the organization, which enabled her to preach the gospel. Savannah was preceded in death by her parents James and Louise McDaniel; sister Airy (Katy) brother-in-law Ollie Drake; brother James McDaniel; son Odell; daughter Arlene and great grand-son Jeremiah. Savannah is survived by her brother; Jesse, children; Catherine, Otis, Sandra, and Vicki, grandchildren; Reggie, Scott, David, Debra, Sean, Savan, Twamika, Kendra, Shaina, Richard and Jacquelynn; twenty-one great grandchildren and eight great great grandchildren.

The family of Savannah Ketchum created this Life Tributes page to make it easy to share your memories.

Savannah Ketchum, age 97, passed away peacefully in her home...

Send flowers to the Ketchum family.