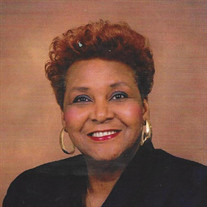 Sarah Elizabeth Jones, age 84 years old went home to be with the Lord on Monday, April 8, 2019 after a short illness at Hospice of Northwest Ohio. She will be greatly missed by her family. Sarah was born October 30, 1934 in Scottsboro, Alabama.... View Obituary & Service Information

The family of Sarah Elizabeth Jones created this Life Tributes page to make it easy to share your memories.