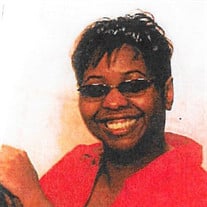 Sunrise was Thursday March 9, 1967 and her sunset was Tuesday July 12, 2016. She was born to the union of Hobart and Mae Johnson. Sabrina was a lifelong member of Greater St. Mary’s Missionary Baptist Church. At the early of 7 she was baptized and accepted Christ as her Lord and Savior. Sabrina sung in the choir and served on the junior usher board. In 1985 Sabrina graduated from Edward Drumond Libbey High School. Sabrina exceled in high school, where she maintained a 3.6 G.P.A. and graduated with honors. Sabrina was very active while she was in school. Sabrina played varsity basketball all four years of high school. She was on the powder puff football team and ran track. Sabrina placed 2nd place in shot put in the city finals. While at Libbey High School she set the bench pressing record for 268 pounds and still’s hold the record for weight lifting. After high school Sabrina went to Penta Career Center. That is where she received her certification as an Automotive Body Repair technician in 1987. Later on Sabrina went to Owens Community College for culinary arts where she received her Associates degree in 1990. After college Sabrina held several jobs until she decided to go to school for skin care and art. Sabrina attended Faces salon and academy in Fremont, OH. There she received her certificate as an Esthetician in 2002 from there she went on to Columbus OH, in order to get her licenses from state board in 2002 and she passed. Sabrina’s dream was to open up a full a day spa/ restaurant. Due to her illness she was not able to fulfill her dreams but she did maintain her Esthetician licenses until the day she passed away. Sabrina was a serious Dallas Cowboy fan and make-up artist. Sabrina was a gifted provider she always put her kids and family before herself and her needs. Sabrina had the biggest heart and believed in family unity. She enjoyed her family and she was an extraordinary mother, daughter, and sister. She was very passionate with everything that she did and no matter the situation she always kept a smile on her face even when she became ill. Sabrina’s biggest pride and joy was being a good mother, daughter, sister, and friend. She leaves behind to cherish her beloved daughter and caregiver Akiela Johnson, Patrick Johnson, Jamaal Brasswell, her loving mother Mae Johnson, grandchildren Devontae Carter, Jayla Lear, Jamaal Jr., Nehemiah Johnson, sister Gina Johnson and brother Hobart Johnson, best friend David Light and a host of nieces, nephews, cousins and other relatives and friends. Wake services Saturday 12 noon followed by funeral service 1 p.m. Dale-Riggs Funeral Home Chapel, Rev. Steven R. Furr officiant, disposition will be private.

Sunrise was Thursday March 9, 1967 and her sunset was Tuesday July 12, 2016. She was born to the union of Hobart and Mae Johnson. Sabrina was a lifelong member of Greater St. Mary&#8217;s Missionary Baptist Church. At the early of 7 she was... View Obituary & Service Information

The family of Sabrina Johnson created this Life Tributes page to make it easy to share your memories.

Sunrise was Thursday March 9, 1967 and her sunset was Tuesday...

Send flowers to the Johnson family.