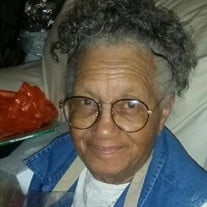 Rosetta P. Wilson was called home on April 26, 2020 at the Toledo Hospital. She came into this life on January 1, 1935 in Decatur, Alabama. Rosetta attended Libbey High School and was employed by Toledo Head Start Teacher and worked many... View Obituary & Service Information

The family of Rosetta Wilson created this Life Tributes page to make it easy to share your memories.

Send flowers to the Wilson family.