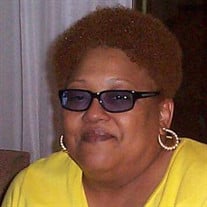 Mrs. Rosalyn Jo Hobson Johnson, 68, transitioned into heaven February 8, 2017. She was born to the Union of the late Lee W. and Ruby M. Hobson on September 16, 1948 in Toledo, Ohio. Rosalyn was a member of Mount Pilgrim Baptist Church under... View Obituary & Service Information

The family of Mrs. Rosalyn Jo Hobson Johnson created this Life Tributes page to make it easy to share your memories.

Send flowers to the Johnson family.