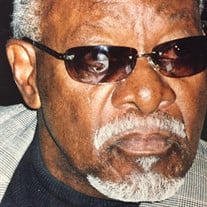 Robert Harding Vines, Sr. (94) departed this life on May 25, 2017, In Toledo, OH surrounded by his family. He was born on October 20, 1922, to the late Artis and Mary Vines in Toledo, OH. He was married to Georgia Ann Vines for 48 years. He was known to most as “Bobby” and to the family as “Uncle Bobby”; the “Patriarch” and “the Godfather.” He was an avid bowler, bike rider, senior league bowler, and champion table tennis player. He was employed with the Toledo Post Office for over 30 years. He was drafted into the U.S. Army at a young age, where he served his country during World War II (1940-1944). He was a driver in the famed “Red Ball Express” in Europe that delivered needed equipment to the troops on the front lines. All people knew Bobby as a fun-loving guy and one who loved to laugh. Bobby saw a lot of things – segregation, desegregation, the civil rights movement, many invention, various natural disasters and the election of the United States first African-American President in the many years that he lived here on earth. He is preceded in death by his parents, Artis and Mary Vines, his wife, Georgia Ann Vines, siblings, Clifton Vines, Sadie Hackley, June Dabney and Adel Barnes; granddaughter, Deidra Burton-Vines. He leaves to cherish his precious memories; children: Robert Vines, Jr. (Toledo, OH) Roederick Vines (Sharron Vines), Atlanta, GA, Melvin Vines (Okaru Love), (New York), grandchildren: Dwan Vines, Niama Vines, Robert Vines, III, and Nicole Howe, great-grandchilden: Thadiyanna Howard and Nizem Birchett, and many nieces and nephews. Memorial services will be Thursday 5:00 p.m. at Dale-Riggs Funeral Home, interment will be private.

The family of Robert Harding Vines Sr. created this Life Tributes page to make it easy to share your memories.

Send flowers to the Vines family.