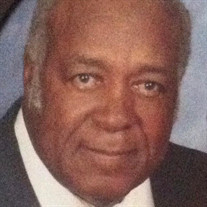 On October 7, 2019, the gates of Heaven were opened and Robert Raymond Lothery made his transition to his heavenly home. “A job well done my good and faithful servant.” Raymond Lothery was born on April 30, 1942 to the union of Mr. and Mrs. Paul and Mary Pearl Lyons-Lothery in Toledo, Ohio. He received his general education in the Toledo Public School System, graduating from Macomber-Whitney High School in 1960. He received his Bachelor’s Degree from Tri-State University (Trine University) in Angola, Indiana. He received many accolades while playing basketball at Macomber-Whitney and later at Tri-State. During his tenure at Tri-State, Raymond led his basketball team to many championships. His love for playing basketball, led him to play with the “Original Harlem Globetrotters”. He traveled the world with the Original Harlem Globetrotters for five years. Raymond loved the Lord and accepted Christ at an early age, and was baptized at St. Paul A.M.E. Zion Church, where he remained an active and faithful member. He served on the Usher Board, Trustee Board, and the Steward Board. He always made sure that his church was taken care of. He mowed the church lawn and when it snowed he made sure that the church’s parking lot was plowed and the sidewalk was cleared for its members. Raymond was a visionary, leader, humanitarian, executive and activist for his community. He had a heart for service and for the youth in the community. He worked for the Toledo Public School System as a teacher. Shortly after that he found his passion and became the Director of the Indiana YMCA and the Wayman Palmer YMCA. He always had time to impart wisdom and to encourage the youth. During his tenure as the Executive Director of the Y, he was a father and an uncle to many. Raymond loved God, family, youth, and his community unconditionally. He was a dynamic man who went out of his way to help others. He inspired many youth to make positive changes in their lives. After having served twenty-five (25) years at the “Y”, he retired and started his own Lawn Services (Big Ray’s Lawn Service). Once again, doing what he loved most-helping others. He played Federation Basketball for years and was an avid bowler for many years. He was also a die-hard Cleveland Browns fan. He received numerous awards and recognitions for his service to his community. Raymond will be most fondly remembered as a loving and devoted husband, “grandpa”, brother, uncle, mentor and as a friend to many. He knew no stranger. He was preceded in death by his parents, two sisters, Marcia Fitzpatrick, Jackie Lothery, and his nephew, James Fitzpatrick. Celebrating his legacy and cherishing his memory includes his loving and devoted wife of forty-one years, Billie Jean Lothery; three brothers, Paul (Louise) Lothery, of Winter Garden, Florida; Michael Lothery, Darryl (Catherine) Lothery, all of Toledo, Ohio; and one sister, Janet Durley, of Atlanta, Georgia; Nikki Wilson, who he fondly called his daughter; grandsons Jalen Wilson and Braden Sutton, all of Toledo, Ohio; lifelong devoted friends Calbert Temple and Byrl Wright; special friends Bill Skadow, Jim Dehaven, and Lorraine Bartley; and a host of nieces, nephews, cousins and other loving relatives. A special “thank you” to Lawrence Bowen his aide; Hospice of Northwest Ohio, and Ohio Living Home Health and Hospice. Visitation will be Monday, October 14, 2019 from 4-8:00 p.m. Dale-Riggs Funeral Home Chapel, wake service Tuesday, October 15, 2019 at 10:00 a.m. followed by funeral service 11:00 a.m. at St. Paul A.M.E. Zion Church, 954 Belmont Avenue, Rev. Ronald Bailey pastor, interment Historic Woodlawn Cemetery. www.dalefh.com

On October 7, 2019, the gates of Heaven were opened and Robert Raymond Lothery made his transition to his heavenly home. &#8220;A job well done my good and faithful servant.&#8221; Raymond Lothery was born on April 30, 1942 to the union of Mr.... View Obituary & Service Information

The family of Robert Raymond Lothery created this Life Tributes page to make it easy to share your memories.

Send flowers to the Lothery family.