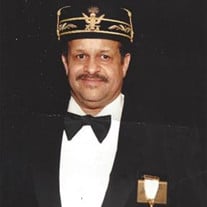 Robert (Dr. Bob) Lester Banks, Sr. 77, passed away on December 7, 2020 at The Laurels of Toledo. He was born May 10, 1943 in Toledo, Ohio to Calvin Kenneth Banks, Sr. and Mary Alice Banks. Bob was a lifelong resident of Toledo, Ohio. He attended Toledo Public Schools, earning his G.E.D. in 1983 and received certification as an Executive Housekeeper from Bowling Green State University. Bob was employed at Libbey Owens Ford (L.O.F) from 1964 to 1982. He worked at the Grenadier Club for over 20 years as a custodian. He also worked 21 years as a custodial staff employee at the University of Toledo, where he served as a supervisor, a member of CWA, Local 4530 and on various committees. In 1997, he was awarded the “Gold Lunchbox” award for advanced union counselors. Retiring in 2005, Bob received a proclamation from the late Mayor Jack Ford for 9 years of perfect attendance at the University. He served on the United Way Campaign, Holiday Food Basket Distribution, Angel Tree Helper and Adopt-A-Family committee. Bob accepted Jesus Christ as his personal Savior at an early age and was an active member of Warren A.M.E. Church where he worked as a part-time custodian for many years and served on the Prison Ministry and Steward Board. He was deeply committed to a love of God and neighbor, respect of self and service of community. As past Master and Financial Secretary of Composite Lodge #108 of the Most Worshipful Prince Hall Grand Lodge State of Ohio, Bob served whenever and wherever needed. He is past Commander in Chief of St. Matthews Consistory #24, Ancient and Accepted Scottish Rite of Freemasonry, Prince Hall Affiliation Northern Jurisdiction, USA Inc., Eastern Star Chapter Pride of Composite #81, past High Priest of Maumee Chapter #6 Royal Arch Masons, Zabud Council #2 Royal and Select Masters and assistant recorder of Mecca Temple #43. He was elevated to the 33rd and last degree of Masonry of the United Supreme Council, AASR of Freemasonry, Prince Hall Affiliation Northern Jurisdiction, USA. Inc. in May 1995. He was also a member of Alcoholic Anonymous (AA) with forty-six years of sobriety which made all of this possible. Bob earned his “Dr. Bob” nickname while he was working at L.O.F., in the middle of a book by the co-founder of AA, who shares the first name Bob, when co-workers asked him what he was reading. They said, well, if you’re reading Dr. Bob, then you must be Dr. Bob, but the meaning has evolved over the years. Bob was known as “Jinks” by his family and affectionately known as Dad, not only by his children, but all the kids in the neighborhood. He always stepped up to help out in any way he could, whether it was a family member, friend or someone in the neighborhood in need. He was preceded in death by his parents, wife of fifty-five years; Imogene Delores Banks, daughter; Tina Marie Banks-Allen and grandson; Robert L. Banks, III. He leaves to cherish his memory his brothers; Rev. Calvin K. Banks, Jr. and Pastor Darian N. (Fania) Banks, daughters; Mary A. (Keven) Banks-Johnson, Tiffany R. (Rodney) Whitlow, and son, Robert L. Banks, Jr., 12 grandchildren; DeMarq (Renata) Banks, Willette (Timothy) Stallworth, Donovan Banks-McCoy, Sharaee Harris, Robert Truss, Jr., Ramon Banks, Willie Smith, Karrisma Smith, Ronald Allen, Shaqunda Nelson and McKenna Banks, 15 great grandchildren, special friends; Bobby Lee Hawkins,Robert Gardner, Bertha Richardson, Henrietta Mister and a host of nieces, nephews, other relatives and friends. Bob’s most prized possessions were his children; his hobbies included making rock jewelry and writing poetry. I am the resurrection, and the life; he that believeth in me, though he were dead, yet shall he live: And whosoever liveth and believeth in me shall never die. John 11:25-26

Robert (Dr. Bob) Lester Banks, Sr. 77, passed away on December 7, 2020 at The Laurels of Toledo. He was born May 10, 1943 in Toledo, Ohio to Calvin Kenneth Banks, Sr. and Mary Alice Banks. Bob was a lifelong resident of Toledo, Ohio. He attended... View Obituary & Service Information

The family of Robert L. Banks created this Life Tributes page to make it easy to share your memories.

Send flowers to the Banks family.