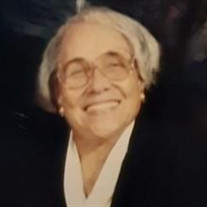 On Friday, October 22, 2021, God called our beloved Rebecca Estella (Griffin) Tucker-Davis home. A truly devoted mother and loving grandmother to her family. Rebecca was born on January 11, 1924, in Scott, Mississippi to the union of Lewis and Lizzie Griffin. She was their only child. She attended schools in Mississippi. Rebecca came to Toledo and was employed under various positions with the last one being Supply Service Attendant at the Ameritech Corporation (Telephone Company) where she retired after 36 years. Rebecca had an entrepreneur spirit that lead her to be part owner of a restaurant business (with husband at the time Rev. William Tucker). She was a wonderful cook with her specialty being her peach cobblers and sweet potato pies. The restaurant was in the black community on the corner of Norwood and Detroit Ave., called Tuck’s Grill. Rebecca owned and managed several properties throughout the city. Rebecca went to the University of Toledo (age 60’s) to study Botany and received recognition for her efforts in the newspaper. Rebecca joined Phillips Temple C.M.E. Church in 1957. She was a Sunday School Teacher and Superintendent, President of the Missionary Society, President of the Senior Choir, President of the Stewardess Board, Director of the Board of Christian Education and Secretary of the Board of Evangelism. Rebecca was a Role Model to many and her Christian values where instilled in all who she mentored. Rebecca was preceded in death by: Her parents Lewis and Lizzie Griffin at an early age. Leslie Carl Davis and Eric Shane Davis, Stepsons, Myron Sims, Grandson, and a widow of Rev. William Tucker, Albert Davis and Harold Davis Rebecca leaves to cherish her many memories: Daughter: Roxie Sims, Toledo; Larry Tucker, Vince Davis (Pathy) and Michael Davis, Stepsons; Grandchildren: Denice Lewis-Howell (David), Jeffery Ridley, Jennifer Harris-Odoms (Robert); Larry Tucker, Jr.; Great Grandchildren (7), Great, Great Grandchildren (13), Great, Great, Great Grandchildren (4), and a host of relatives and friends

On Friday, October 22, 2021, God called our beloved Rebecca Estella (Griffin) Tucker-Davis home. A truly devoted mother and loving grandmother to her family. Rebecca was born on January 11, 1924, in Scott, Mississippi to the union of Lewis... View Obituary & Service Information

The family of Rebecca E. Tucker-Davis created this Life Tributes page to make it easy to share your memories.

Send flowers to the Tucker-Davis family.