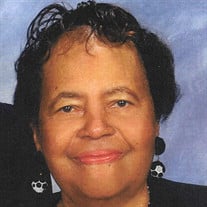 Quinters Jean Cohen (Queen) was born to Anna Mary and Quinters Dixon on November 22, 1931. She was the first daughter born of this union. Quinters was raised in her early years in Memphis, Tennessee. Like so many other Black families, her family migrated north in the 1940s, settling in Toledo, Ohio. In Toledo, Quinters attended Woodward High School and met the love of her life, Charles Cohen. The two were married in 1950 and quickly started their family. They were blessed with their first daughter Charlene. Charles Jr. arrived two years later and Cathy was their late surprise arriving over nine years after Charles Jr. Quinters devoted herself to being a full-time mom and wife. She built a loving home with Charles that was made stronger with each passing year. They were parents together, partners in life and each other's confidant. Quinters was always shy but social. She loved spending time with her extended family, especially since she and her brothers and sisters all had children about the same time and essentially raised them together. Beyond her family, Quinters was also active in other groups. She was especially devoted to her church where she was a member of the Women's Club, sang in the choir and helped with many events at the church. Quinters' most rewarding job was as a teacher's aide at Nathan Hale where she taught elementary school children how to read. The children were drawn to her kind and supportive teaching style and she loved the children. Toward the end of her life Quinters faced a series of health challenges but she always continued to fight. These health challenges never diminished her devotion to her family. She was a great wife, mother, sister, grandmother and aunt. She will be dearly missed. Left to cherish her memories is her husband of 67 years, Charles Cohen; daughters, Charlene Mack, Cathy (Beth Richie) of Chicago; son, Charles Jr.; sister, Mary Louise Patterson; half-brother, Robert (Marcella) Brown; grandchildren, Terrance, Tony, Tamera (Milton), Charles III and Ella; and many great-grandchildren, nieces, nephews and loving relatives. Quinters was preceded in death by her mother, Mary; father, Quinters; brothers, Clarence Young, Harold Young, Samuel Young, I.G. Dixon; sister, Rose Stewart; and son-in-law, Henry Mack. Wake services will be Friday 11:00 a.m. with funeral services following at 12:00 p.m. Braden United Methodist Church, Rev. Wynston E. Dixon pastor, interment Historic Woodlawn Cemetery. Arrangements entrusted to Dale-Riggs Funeral Home. http://www.dalefh.com

Quinters Jean Cohen (Queen) was born to Anna Mary and Quinters Dixon on November 22, 1931. She was the first daughter born of this union. Quinters was raised in her early years in Memphis, Tennessee. Like so many other Black families, her family... View Obituary & Service Information

The family of Mrs. Quinters Jean Cohen (Queen) created this Life Tributes page to make it easy to share your memories.