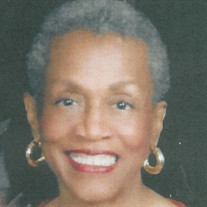 Peggy J. Coleman passed away October 7, 2016 at Cleveland Clinic. She was born on August 29, 1940 to Arthur Sr. and Aleathia M. Carson in Toledo, Ohio. She was the third of six children born to this union. A lifelong resident of Toledo, she graduated from Jesup W. Scott High School. In 1960, she married Edward Coleman and they were married for 56 years before he departed this life on August 18, 2016. They had 2 children, Katrina Jill and Edward Brian Sr. Peggy earned her Bachelor's degree in Education and Master's degree in Counseling from University of Toledo. She was a member of Alpha Kappa Alpha Sorority, Inc. She was employed by the Toledo Municipal Court for over 25 years as a probation officer, retiring in 2005. Prior to becoming a probation officer, she taught elementary school in the Sylvania Public School System. She gave her life to Christ at an early age at Third Baptist Church where she was a lifelong member. She loved the Lord, she loved serving Him and reading His word. Peggy was involved in numerous civic activities, including the League of Women Voters, volunteering for candidate campaigns, and Boys2Men advisory committee. She enjoyed cooking for her family, as well as decorating, shopping, landscaping, gardening and exercising. She was also an avid reader and researcher. She was preceded in death by her father, Arthur Carson, Sr. and her husband, Edward Coleman. She leaves to cherish her memory, Katrina Jill Coleman, Lansing, Michigan, Edward B. (Tammie) Coleman Sr.; grandsons, Edward B. Coleman Jr. and Jarrod Jefferson; mother, Aleathia M. Carson; sisters, Joan E. Goldman, Marilyn Carson Wilson and Rev. Dr. Janice (Sam) Carson-Hearn; brothers, Rev. Arthur Carson Jr., and David (Karen) Carson; sisters-in-law, Mamie L. Hart (Johnny) and Cora Hammond; and many loving nieces, nephews, relatives, and dear friends. Visitation will be Monday 11:00 a.m. followed by funeral services at 12:30 p.m. Dale-Riggs Funeral Home Chapel, Dr. Janice Carson -Hearn officiant. Interment Historic Woodlawn Cemetery. www.dalefh.com

Peggy J. Coleman passed away October 7, 2016 at Cleveland Clinic. She was born on August 29, 1940 to Arthur Sr. and Aleathia M. Carson in Toledo, Ohio. She was the third of six children born to this union. A lifelong resident of Toledo, she... View Obituary & Service Information

The family of Peggy J Coleman created this Life Tributes page to make it easy to share your memories.

Send flowers to the Coleman family.