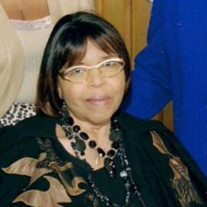 Pearley (Turner) Lawson was born October 1, 1944, to Fred and Florence Turner. She was an only child and beloved of her parents. On October 27, 2021, she departed quietly and peaceful to her heavenly home while in the company of family. Pearley attended Toledo Public schools. She graduated from Scott High School. Pearley married after high school and gave birth to two children: Kirk Tyrone Manning and William Anthony (Tony) Manning. She later married Harold A. Lawson. From this union came 2 children. Pearley and Harold loved to travel. They traveled all states except Hawaii. Pearl loved spending time with her cousins and friends. Nineteen of them went on a cruise together and played scrabble until dinner time. Pearley was a public servant during her early years of employment. She worked at Red and White market and Black Giant Market. She went to work for EOPA as a bus driver. She later began working for Toledo Public Schools as a bus driver. She became a dispatch for Toledo Public Schools. Pearley was promoted to supervisor in transportation. She retired after 27 years. Pearley attended WALASH (COGIC), which later became Zion COGIC. Zion later became New Life COGIC. In 1999 she became a member of St. James Holiness COGIC. She sang in the choir under Derrick Roberts and worked with Children’s Ministry under Dr. Denise Carr. She was an Honorary Mother in the Children’s Ministry and working with special projects. She was involved with the Rock and Pray ministry which is for children with special needs. Pearley served in registration under Sister Terri Clark at the State Workers Meeting and the State Holy Convocation under Bishop James until his passing and then Bishop Cook. She worked with registration department until she was no longer able. Pearley was preceded in death by her parents, husband: Harold Lawson, sons: Kirk Tyrone Manning and William Anthony (Tony) Manning and daughter: Sabrina Jennings. She leaves to cherish her memory sons: Dr. Wayne (Loretta) Lawson of Atlanta Georgia, Craig Lawson, Bryant [Lisa) Lawson, Daughter: Dr. Donna Cunningham , Grandsons: Cedric Lawson, Christopher Lawson, Dominic Manning, Bryant (Bud) Mills, Cameron White of Kleen, Texas, and Tylha Lawson, Granddaughters: Kenyatta (Eddie) Heath of Atlanta Georgia, Deonna Gregory, Natasha Gibson, Erika Gregory, Naeemah Lawson of Atlanta, Valyncia Caldwell, Fashionette Sullivan, Saran Lawson of Atlanta Georgia, Tatiana Manning, Aisha Lawson of Atlanta Georgia, Tashayla Jack of Villie Platte, Louisiana, and Myanna Copeland, 28 great grand-children, and a host of family and friends. The family would like to thank Manor of Perrysburg for the love and care they extended to her, coworkers at Bd of Education, those who were directly or indirectly a part of her life, her church family who were able to visit, call, and pray for her, the RSVP Organization, and anyone else who we may not have mentioned. Special thank you to Cedric Lawson who became her caregiver after our dad’s death, before entering nursing care fulltime and to Minister Leslie and Bernetta Boyd for spending countless hours being available and taking care of her needs.

Pearley (Turner) Lawson was born October 1, 1944, to Fred and Florence Turner. She was an only child and beloved of her parents. On October 27, 2021, she departed quietly and peaceful to her heavenly home while in the company of family. Pearley... View Obituary & Service Information

The family of Pearley Lawson created this Life Tributes page to make it easy to share your memories.

Send flowers to the Lawson family.