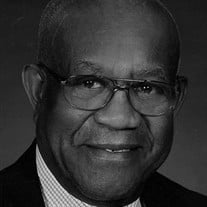 Resilient, honorable, devoted, and reliable only begin to describe the man we knew as Paul Franklin Penn,Sr. Known to many as “P.P.”, Paul was born in the home of his parents, Roswell and Nellie Penn on their family farm in Athens, Alabama. He was one of eight children, raised in a very loving, nurturing, and hardworking family. His parents led by example and taught him at an early age - the value of hard work, self-discipline, helping others less fortunate than yourself and most of all, to love the Lord our God with all his heart. Accepting Christ at an early age at Pleasant Grove Cumberland Presbyterian Church, combined with a solid foundation of high moral values and a strong work ethic, Paul then went on to be educated at Trinity High School in Athens, AL, and the University of Toledo. After being drafted into the army during the Korean War, he went to school in Kansas for food service training at what was then called The Army Headquarters Company. He became the first African American Drill Instructor in charge of an entire class of integrated soldiers at Fort Riley, Kansas. While in Korea, his personality and charm with the Korean children, Paul quickly mastered their conversational language and became an interpreter for his fellow soldiers and Army Command. He was honorably discharged in January of 1954 and served in the Army Reserve. Upon returning home from the army, he and his brother (Judge) Robert Penn, owned a store in East Toledo called Penn Market near Yondota St. He worked for the City of Toledo for six years in the Housing Authority and the Public Utilities departments, after which he was hired by the Pepsi Cola Bottling Company where he became a highly-respected trail blazer, breaking many racial barriers, and remained employed by them for nearly 30 years until retirement in 1989 having worked as the Marketing and Product Development Manager. During that time, he became a member of Grace Presbyterian Church and served as a Deacon, Elder, Chairman of the Stewardship Committee and much more. Paul truly loved his church. Paul was a member of the NAACP, the Frederick Douglas Center and he was appointed to the Safety Board of the City of Toledo by then Mayor Harry Kessler. Whether he was delivering food to elderly or disadvantaged families, providing financial assistance when and where it was needed, or encouraging numerous young people to pursue their dreams, Paul always loved to serve and help others. His ability to connect with youth was a special gift. An avid bowler and golfer, he enjoyed a friendly rivalry with his dearest friends, Judge Robert “Bob” Franklin and Dr. Joseph “Jo Jo” Sommerville as they would travel together for golf vacations in the winter. One of his greatest pleasures was going each year to the Kentucky Derby with his wife for 39 years where they always made new and lasting friends. Other than his devotion to the Lord, nothing brought him greater joy than his love for his family. Paul met and married the love of his life, Delores Ann Ferrell, through a chance encounter and they raised two children, Paul Jr. and Kim, with love and devotion spanning for over 51 years. The family, friends, and neighbors, especially the children they nurtured, were all treated as if they were their own, and their home was always open, loving, and inviting. Paul's survivors include his wife, Delores; son, Dr. Paul Franklin Penn Jr. (Patrice) of Atlanta, GA; daughter, Kim Lynette Penn; granddaughters, Aja Noel Penn-Todd and Paris Elizabeth Penn and grandson, Paul Franklin Penn, III; brothers, Oliver and Charles Penn; sister, Hattie Wall; Godson, Gary Franklin and a host of other extended family and friends. He is finally with the “Man Upstairs” and will truly be missed. The services will be held at Grace Presbyterian Church, 1171 Oakwood Avenue on Saturday, March 4, 2017 wake 10:00 a.m. followed by funeral 12:00 p.m. Arrangements entrusted to Dale-Riggs Funeral Home and interment at Ottawa Hills Memorial Park. The family requests that in lieu of flowers, please donate to the Toledo Boys and Girls Club on Detroit Ave. or the National Organization of Rare Disorders nord.org in memory of Paul Penn Sr.

Resilient, honorable, devoted, and reliable only begin to describe the man we knew as Paul Franklin Penn,Sr. Known to many as &#8220;P.P.&#8221;, Paul was born in the home of his parents, Roswell and Nellie Penn on their family farm in Athens,... View Obituary & Service Information

The family of Paul Franklin Penn Sr. created this Life Tributes page to make it easy to share your memories.

Resilient, honorable, devoted, and reliable only begin to describe...

Send flowers to the Penn family.