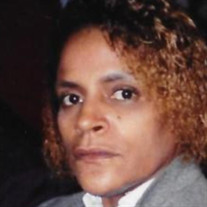 Ora Pearl Guyton was born on September 5, 1942 to Leroy Gardner and Eva Mae Wells Gardner in Ethelsville, AL. Ora accepted Christ at a young age and was baptized at Providence Baptist Church. Ora graduated from Hopewell High School. After which she married Willard Guyton Sr. and relocated to Toledo, OH. Once in Toledo Ora began working for Goodyear Tire Company later known as Motorwheel Tires from which she retired. Once a resident of Toledo Ora became a member of Bethlehem Baptist Church where she served on the Usher Board, advisor of the Jr. Usher Board, a Sunday School Teacher, a Boy Scout Troop Leader as well as serving on many committees. Ora loved serving the Lord and her church, and she did so until the day she was no longer able. Ora also enjoyed watching her favorite shows such as her daytime soap, Law and Order, CSI and The Big Bang Theory. Ora went home to be with the Lord on April 19, 2021 at Promedica Toledo Hospital surrounded by family. She was preceded in death by her parents Leroy Gardner and Eva Mae Gardner, her husband Willard Guyton Sr, her brothers Henry Grove, Billy Gardner and Willie Joe Gardner. She leaves to cherish her memory her four children Todd Gardner, Willard (Bridget) Guyton Jr, Charlie Guyton and Niki Guyton, her grandchildren Charlie Moore, Jordan Guyton,Jonathon Guyton, Nya Guyton, Desiree Moss and Jennifer Costilla, her sister Odestia (Wilbur) Lewis, her brothers Willie Roy (Lynn) Gardner, Tommy (Jean) Gardner, Leon Gardner and Arthur Gardner, her aunt Frances (Milton) Guyton, a host of inlaws, nieces, nephews, cousins, friends and her church family. Ora’s presence will be greatly missed.

The family of Ora P. Guyton created this Life Tributes page to make it easy to share your memories.

Send flowers to the Guyton family.