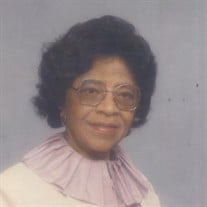 On December 21, 2016, Olla M. Brown, transitioned peacefully into the arms of the Lord at Sunset Village, Sylvania, Ohio. She was 94, born November 7, 1922, in Benton, Missouri to the union of Ella Hamer Lott and Cleveland Lott, Sr. Prior to her relocation to Toledo, Ohio, she co-owned and operated a beauty salon and was an elementary school teacher in Galax, Virginia. In 1953, she and her late husband moved to Toledo, OH, where she was a homemaker and a hairstylist. She became a member of Morning Star Baptist Church and later pioneered Freedom Temple Baptist Church where she was a trustee, a member of the choir and maintained membership until she became ill. She was employed for 25 years by Toledo Public Schools as a para-professional retiring in 1989. She enjoyed traveling, socializing, planning events and serving as a neighborhood block captain. She was a member of various organizations, including the VFW and a life member of The Henrietta Society. Olla was preceded in death by her parents, her husband George R. Brown; son, James Kevin Brown; sisters, Clara Lott-Usher, Marie Lott-Swan, Annie Bell Daniels; brothers, Claude, Jessie, Calvin, Robert, William and Cleveland Lott, Jr. She is survived by her daughter Jettie (Joseph) Sansbury; son, Michael; granddaughters Shawn and Amy Sansbury, and great-granddaughter Haley Townsend all of Stone Ridge, Virginia. Friends will be received on Wednesday, December 28, 2016, at 10:00 a.m. with funeral services following at 11:00 a.m. at Dale Funeral Home Chapel, Toledo, OH. Interment will be Ottawa Hills Memorial Park. The family would like to express their sincere gratitude to Sunset Village staff for the care given to Olla. Contributions and donations may be made to Sunset Village Nursing Home, 9640 Sylvania-Metamora Road, Sylvania, Ohio 43560

On December 21, 2016, Olla M. Brown, transitioned peacefully into the arms of the Lord at Sunset Village, Sylvania, Ohio. She was 94, born November 7, 1922, in Benton, Missouri to the union of Ella Hamer Lott and Cleveland Lott, Sr. Prior... View Obituary & Service Information

The family of Olla M Brown created this Life Tributes page to make it easy to share your memories.

Send flowers to the Brown family.