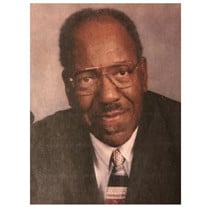 N. Ray Jones was born August 31, 1928 in Charleston, MO. He spent his early years on Illinois and Indiana before relocating to Toledo, OH where he attended Libbey High School. He also attended Tillison College, Austin TX, University of Toledo, Toledo University Community and Technical College, where he earned an Associate degree. He also attended various trade schools and was a graduate of the Toledo Model Cities Leadership program. He accepted Christ at an early age and upon his relocation to Toledo he joined the Phillips Temple CME Church. He was a faithful member, serving as the Chairman of the Trustee Board until his health failed. Until his death he still supported and cared about his church. He also was one of the prominent laymen of the Cleveland-Pittsburgh District and the Ohio-Central Indiana Annual Conference. He served forty-two months in the United States Air Force, being honorably discharged in 1953 as an Airman First Class. On September 1, 1952, he was united in holy matrimony to his beloved wife, Willie. Two children were born to this union. Mr. Jones worked in various positions in the Toledo area, namely the Rossford Army Depot and the City of Toledo’s Parks Department where he rose up the ranks to Supervisor of Parks. Mr. Jones also served in various volunteer capacities the Toledo Model Cities Program, HUD, and the National Citizens Participation Council. Due to his leadership skills, he often served as chairman of the various boards and agencies he worked with. His other affiliations include the Prince Hall Masonic Lodge (32nd degree Mason), NAACP, the Frederick Douglass Center, the Metro Toledo Umpires Association, various motor coach home associations, and other community based organizations in the Toledo area. On July 14, 2020 Mr. N. Ray Jones entered into eternal life where he joins his parents, siblings, and other family members and friends. He leaves to mourn his death and carry on his legacy to his beloved wife of sixty-eight years, Willie L. Jones, son, N. Ray Jones, Jr., daughter, Cynthia Jones, grandson, Ray Jones, aunt Clara Jones, his Phillips Temple Church family, and a host of relatives, friends, neighbors, and community.

The family of N. Ray Jones Sr. created this Life Tributes page to make it easy to share your memories.