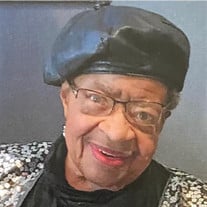 Mary Liza Rankins Howard was born to Lem & Essie Rankins on January 8, 1919 and was the eldest of 7 children. Her father was a well-known farmer in the area, and she often spoke of the joy of growing up on a self-sustaining farm surrounded by abundant crops of fruit, vegetables and animals, even during the hard depression years. She attended Conecuh County Training School and finished her high school education by boarding out of town due to the limitations that training schools provided at the time. Mary gained her heavenly wings on May 6, 2022 at the age of 103. Mary married Samuel L. Howard, also of Evergreen, and they remained married for 68 years until his death in 2007. They had one daughter, Alvetta Moore. In early 1940, the Howards moved to Toledo, Ohio to seek a better future for their family. Although Mary’s main job was caring for her family, she worked the Rossford, Ohio Army Ordnance Depot during WWII and later at the famous Lamson’s Department store as a department clerk. Her work at Lamson’s helped develop her sense of poise and style which followed her throughout her life. She took great pride in being dressed to perfection right down to her matching hats, bags and gloves and passed that trait on to her daughter. She even enrolled tailoring classes to help perfect her look. Raised in Beulah Baptist Church in Evergreen, Mary moved her membership to Third Baptist Church, Toledo, where she was active member for more than 70 years until her health began to fail. She took on any role where she was asked to serve and sang in the church choir for decades. Traveling found a place in Mary’s heart early on. She traveled with her family, club, church, and friends to places like Alaska, the Caribbean and Hawaii. She often spent the entire night before each trip ensuring she would be suitably attired and prepared and that everything would go as planned. Mary joined The Henrietta Society in the 1950s where she held various positions and worked diligently to help the club raise funds to provide support and services to the disadvantaged from all walks of life. She enjoyed and excelled in serving as the Cheer Committee Chairperson where she was responsible for selecting and sending hundreds of greeting cards to the club’s members, families and acquaintances. An active member for over 6 decades, at her passing, she was the last Honorary Life Members of the club. A quiet, genteel woman, being a loving caregiver was Mary’s ultimate role, however. As the eldest child, her mother would often send her younger siblings to stay with her when they became young adults to help them succeed in life. This is how her brother, Percy, and sister Cleola, came to be residents of Toledo. As her extended family grew, her caregiving expanded to nieces, nephews, grandchildren and cousins. That, combined with her hospitality and love of hosting friends and family at her home, ensured that no one left her house empty handed, often with a piece of her famous pound cake or peach cobbler and even Conecuh sausage purchased from her Evergreen hometown as well as some sage advice. Preceding Mary in death were her parents; husband, Samuel; daughter and son-in-law, Alvetta and John Moore; granddaughter, Cathy Moore; and siblings Artelia, Ella, Willie, James, and Cleola. Her caregivers, brother Percy (Rose) Rankins, niece Vickie (Larry) Rankins-Anderson; as well as grandson, Howard “Ric” (Shanon) Moore; stepson, Lonzie (Cynthia) Green; nieces, nephews, step-grandchildren, great-grandchildren, cousins and brothers-in law rejoice in her memory and celebrate the love and care she provided to them and the community. Special Thanks to the Administration and staff of The Lakes of Sylvania and Dr. Fish and staff at The Toledo Hospital Wound Clinic. Memorials can be made to the Cathy Y. Moore Scholarship Fund, in care of the Community Foundation of Toledo.

Mary Liza Rankins Howard was born to Lem & Essie Rankins on January 8, 1919 and was the eldest of 7 children. Her father was a well-known farmer in the area, and she often spoke of the joy of growing up on a self-sustaining farm surrounded... View Obituary & Service Information

The family of Mary Liza Howard created this Life Tributes page to make it easy to share your memories.

Send flowers to the Howard family.