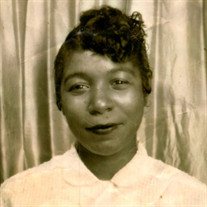 Mary Alice (Boose) Alexander was born in Marion, Mississippi on August 16, 1936. She peacefully transitioned from this life on December 12, 2021. She was a member of and received early Christian training at Mt. Pilgrim Baptist Church. Mary graduated from Holland (Springfield) High School in 1965 and attended Toledo University (U.T). She worked many years for the Model Cities Program in Toledo, Ohio starting at the grassroots level before the program was completely organized, helping to compile information and set up programs for the community residents. Mary was employed by the Model Neighborhood Residents Association (M.N.R.A) as a Community Coordinator dealing with education, welfare, and transportation. She later became director of Urban Concerns. Mary went on to work for the City of Toledo in the Recreation Department followed by the Water Department, and finally she went on to the Department of Street, Bridges, and Harbors until she retired on disability in 1990. Mary was Ward Chairman of Ward 6 and chairperson of 6-0. She was also a foster parent for over 30 years fostering teenagers 15-18 years of age. Mary had over 300 children in her home and loved them all. Her reward was to see them become good citizens. Mary also authored a book titled “A Walk In My Shoes” for others to know and understand what a foster parent endures. She was preceded in death by husband Dalton Alexander, daughter Yvonne R. Alexander, son Will Alexander Sr, mother Ann F. Boose-Jett, father Daniel Boose, sisters Laverne Copeland, and Carolyn Simons, brother George Boose, and devoted friend and companion Iran L. Lawrence. She is survived by grandsons Will Devon Alexander Jr, Shawn Chaney, and Charles Parker, granddaughters Tiffany and Wilaysia Alexander, sister Onida Warren, brother Ernest Boose (Joan), special friends Dorthy Randall, Betty Hughes-Parker, and a host of nieces, nephews, great-grandkids, and other loving relatives and dear friends.

Mary Alice (Boose) Alexander was born in Marion, Mississippi on August 16, 1936. She peacefully transitioned from this life on December 12, 2021. She was a member of and received early Christian training at Mt. Pilgrim Baptist Church. Mary... View Obituary & Service Information

The family of Mary Alice Alexander created this Life Tributes page to make it easy to share your memories.

Send flowers to the Alexander family.