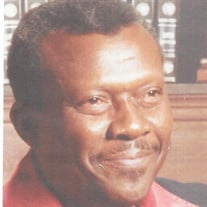 . Luther J. Harris was born on May 1, 1927, in Utica, Mississippi. He made his transition to eternal life on November 8, 2015, at the age of 88. He was part of the great migration of African Americans who moved North in the 1940s, leaving behind cotton fields to work and live with dignity. He brought with him a love of blues music and a passion for hunting and fishing. He married Lula Beatrice Graham in 1953 and they shared over 62 years together while raising seven children. Luther worked for several companies when he first arrived in Toledo, but eventually joined what was then known as Chevrolet. He retired in 1990 after 30 years of service at the General Motors Toledo plant. After retirement, Luther became an entrepreneur and started his own transportation company that was a local version of Uber. He joined Southern M.B. Church under the leadership of Rev. Robert P. Wormely and then under Rev. Lemuel Quinn, III. He was also proud member of the International F.A.M. Masons and Order of the Eastern Star Brotherhood Lodge #077. He was preceded in death by his parents, Caesar and Mary Jane Harris; brothers, Andrew, R.J., and Caesar Jr.; sisters, Ruth Harris, Katie Bell Harris, Della Mae Brown and Pearleana Jenkins; son, Tommie Lee Graham and daughter, Lutherine Poston. He leaves to cherish his memory, devoted wife, Lula; sons, Andrew (Marion) Graham, and Lindsey Harris; daughters, Vernice Blanchard, Earnestine Harris and Marlene (Darrell) Taylor; brothers, Amos (Mary) Harris and John Edward (Nicole) Harris both of New Orleans; son-in-law, Steve Poston and former son-in-law, Herbert Blanchard; daughter-in-law, Sharon Graham; thirteen grandchildren; ten great-grandchildren and two great-great-grandchildren. Visitation Friday from 5 to 7 p.m., wake services Saturday 12 p.m. followed by funeral services 1 p.m. all services will be held at Ebenezer Missionary Baptist Church 2001 Ashland Avenue, Rev. J.L. Jordan pastor, Rev. Lemuel Quinn III officiant, interment Historic Woodlawn Cemetery. www.dalefh.com .

. Luther J. Harris was born on May 1, 1927, in Utica, Mississippi. He made his transition to eternal life on November 8, 2015, at the age of 88. He was part of the great migration of African Americans who moved North in the 1940s, leaving... View Obituary & Service Information

The family of Luther J. Harris created this Life Tributes page to make it easy to share your memories.

Send flowers to the Harris family.