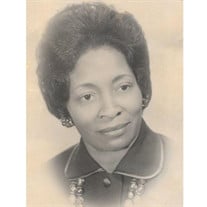 Lucyetta Price October 9, 1920 – April 2, 2022 Lucyetta Price known by her loving family as “MiMi”, age 101, of Toledo, Ohio, passed away peacefully on April 2, 2022. She was born October 9, 1920, in Marion Junction, Alabama, to the union of John Perry and Lucy Finkel-Perry. She was the 9th of 11 children. MiMi was united in Holy Matrimony to Rev. Clarence Price, Sr., on December 22, 1941. They moved to Toledo, Ohio, purchasing a home on Valentine’s Day 1944, where they would raise five children. They enjoyed 28 years of marital bliss before Clarence Sr., passed away June 23, 1969. MiMi continued to reside in the same residence for 78 years, and everyone on the block came to love her. MiMi worked a variety of jobs over the course of her younger years before going to cosmetology school. In 1957, she became a licensed cosmetologist and owned her own beauty salon. Eventually her children would build her a salon in the backyard of her home. Although she no longer serviced clients, her cosmetology license remained active for 64 years, as well as her driver’s license, though she thankfully stopped driving decades ago! In her younger years, MiMi loved to travel annually with a small group of friends, and had the opportunity to visit numerous cities, including Hawaii. Mimi was, and will forever be known as a true “diva” whose southern charm made her even more lovable! She always had a love of fashion; wearing beautiful hats, dresses and shoes, and “Dressing to the Nines” at every opportunity. Additionally, to say that MiMi was an excellent cook would understate her abilities, and she loved to bless others with her culinary talents. MiMi loved a clean house, could cook anything, and loved to feed everyone. Her southern hospitality was always on display, insisting that her guests eat off fine china and freshly pressed tablecloths. Her pound cakes were legendary, and she was still baking and even selling cakes well into her 90s! MiMi was especially proud of raising her five children, and never uttering a curse word. Rather than curse, she would simply say “whoppsie”! MiMi was a longtime member of the St. Paul Missionary Baptist Church. She proudly served on the Nurse’s Guild and worked in the church kitchen. MiMi loved the Lord and knew Him well for herself! She raised her children to be God fearing and lived a life of faith. Once unable to attend regular church services, she remained devoted to her faith and her family. MiMi was preceded in death by her loving husband, Clarence Price Sr., 6 brothers and 3 sisters, daughters Shirley Price and Theotha Cooper, and 2 grandchildren, Temika (Cheyanne) Wellborn and Lateef Price. MiMi is survived by her sister Eva Smith; son, Clarence Price; daughters, Cliffie Hunter and Marie Darden; special daughters Gayla Price and Tracie Williams (Sean); 12 Grandchildren; 34 great grandchildren; 3 great-great grandchildren, along with loving nieces, nephews and many, many more family members and friends who will miss her dearly. We pray that MiMi continues to pray for us and love us until we see her again! She is, and will always be, a blessing to us all!

The family of Lucyetta Price created this Life Tributes page to make it easy to share your memories.

Send flowers to the Price family.