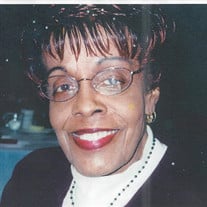 Lovell Jones, age 94, passed away peacefully April 9, 2017, at Kingston Care Center Of Sylvania. Lovell was born August 28, 1922, to the union of Walter and Elizabeth Barber. She graduated from Rayen High School in Youngstown, Ohio. She married William Lester Harris, Sr. in 1943 and to this union their son, William L. “Bill” Harris Jr. was born. Later she married Cleo “Casey” Jones in June of 1963,. She graduated from the University Of Toledo with a Bachelor’s Degree specializing in secondary education. Before her retirement, she was Director of Medical College of Ohio’s Daycare Center, a position she held for more than 30 years. Lovell had a great passion for her family. She took great pride in being Secretary-Treasurer for Casey Jones’ re-election campaign as the 1st African-American State Representative of Toledo’s 45th District to the Ohio State Legislature in Columbus, Ohio for 13 consecutive terms. Lovell’s five grandchildren often described her to others as “NOT YOUR TYPICAL *GRANNY*” because she was so SPUNKY! She was preceded in eternal life by her parents; her husbands, William L. Harris, Sr. & Casey Jones and her daughter-in-law, Mary Harris. She leaves to cherish her eternal life’s memories: her son, William L. “Bill” (Ann) Harris Jr.; her 5 grandchildren: William (Mary) Harris, Sonia (Ben) De La Torre, Mark Harris, Erika Harris and Camille (Floyd) Hayden; 10 great-grandchildren; 2 great-great-grandchildren and a host of other family and friends. Viewing will be held Saturday, April 15, 2017, at 10 a.m. followed by the funeral service at 11:00 a.m. at the Dale-Riggs Funeral Home, 572 Nebraska Ave., Toledo, Ohio. Interment Toledo Memorial Park

Lovell Jones, age 94, passed away peacefully April 9, 2017, at Kingston Care Center Of Sylvania. Lovell was born August 28, 1922, to the union of Walter and Elizabeth Barber. She graduated from Rayen High School in Youngstown, Ohio. She married... View Obituary & Service Information

The family of Lovell Jones created this Life Tributes page to make it easy to share your memories.