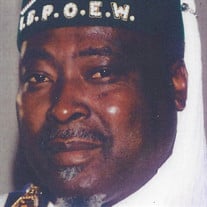 Mr. Louis Hall, 81, of Toledo, Ohio passed away on Saturday, July 2, 2016 in the St. Vincent Hospital, Toledo. He was born in Livingston, Alabama and graduated from Sumter County High School. Mr. Hall was drafted into the United States Army,... View Obituary & Service Information

The family of Louis A Hall created this Life Tributes page to make it easy to share your memories.

Send flowers to the Hall family.