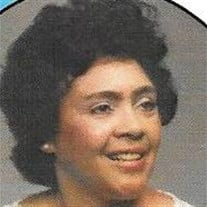 Lorean Quinn Whitaker entered her eternal rest on Tuesday, January 17, 2017 surrounded by her family at Hospice of Northwest Ohio in Perrysburg Ohio.  Lorean was born November 21, 1934 to the union of Lovey May Camper and Robert Quinn Sr. in East Toledo.  Lorean was the 8th of 10 children.  She attended Oakdale School, Washington Elementary, Robinson Jr. High, and graduated from Jesup W. Scott High School in 1952.  Lorean began her life of service by helping to care for her 2 younger siblings at the young age of 8 after the passing of their mother. This helped build the foundation for her passion of caring for others, especially children.  While her 4 boys were young, she was active in their education as a volunteer with the Warren School’s Parent Teacher Association.  Lorean was also active in her community as she worked tirelessly with N.I.F.T.I., the Neighborhood Improvement Foundation of Toledo, Incorporated.  Lorean was also an active Scott High School Alumni working on the school’s Hall of Fame committee for 10 years. She also helped fight for the revitalization of the Historic School.  Lorean began her work with at risk youth at the old Maumee Youth Camp for boys.  She then transitioned to the Lucas County’s Child Study Institute (now the Juvenile Justice Center) from which she retired in 1997 after 30 years of dedicated service.  Lorean took pride in being a mother, grandmother, and caregiver, which carried over to her being a surrogate mother to any child who found themselves at her doorstep.  She always had an opened door to other children, whether they were family or not, and welcomed anyone who needed to stay.    Lorean was preceded in death by her sisters, Homer Lee Hamer, Hattie Beatrice Carter, Elnora Quinn Cook, Osceola Quinn Banks; and her brothers, Harold David Quinn, Robert Quinn Jr., and Lawrence Calvin Quinn.  Also preceding Lorean were her first husband Rudolph Williams, and her sons Bruce Williams Sr. (Margaret), Kim Rudolph Williams, & Joe Dell Whitaker.  She is survived by her son Cortney Van Williams (Bridgette), 14 grandchildren, and 26 great-grand  children, sisters Janet Wyatt and Velma Shoecraft along with a host of affectionately loved friends, nieces, nephews and relations.  Visitation will be Friday 6 - 8 p.m. with family hour Saturday 10:00 a.m. followed by funeral services at 11:00 a.m. all from the Dale-Riggs Funeral Home Chapel, Elder William Lucas officiant, interment Historic Woodlawn Cemetery. Dale-Riggs Funeral Home, Inc.

Lorean Quinn Whitaker entered her eternal rest on Tuesday, January 17, 2017 surrounded by her family at Hospice of Northwest Ohio in Perrysburg Ohio.  Lorean was born November 21, 1934 to the union of Lovey May Camper and Robert Quinn Sr. in... View Obituary & Service Information

The family of Lorean Quinn Whitaker created this Life Tributes page to make it easy to share your memories.

Send flowers to the Whitaker family.