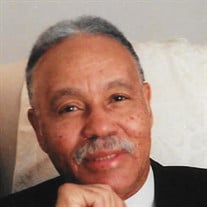 Leslie W. Courts Sr. Leslie Warner Courts Sr. was born February 13, 1936 to Billie & Nycola Courts in Paris, TN. The family re-located to Toledo, OH in 1942. Les Sr. received Christ at an early age. In 1948 he was baptized by Rev. Elliot J. Mason, joining Third Baptist Church at 402 Pinewood Ave., Toledo, OH. Leslie Sr. graduated from Toledo Scott High School in 1955 and attended the University of Toledo. While attending Scott he participated in football and basketball. Les Sr. was an avid music fan and loved Jazz music in particular. He showcased his love of music as a member of the marching band where he played trumpet and alto saxophone. Upon his graduation from Scott, Leslie went to work for the Dana Corporation, Spicer Manufacturing division where he worked almost 40 years. Starting in turning and retiring in the Quality Control Inspection Gear Lab as a Lab technician. In 1957, Leslie took time off from work to serve his country in the United States Air Force at Strategic Air Command from 1957 – 1960 and serving abroad in Puerto Rico. During his service time Les Sr. achieved the rank of E-5 while also challenging his fellow Airmen as an amateur boxer. He received his honorable discharge in 1960. In 1961 Leslie married Joyce M. Harris. There were three lovely children born to this union. Leslie W. Jr., DeLisa J. and Michael A. Courts. Leslie Sr. was very active in the Rogers High School Booster Club where he served as President and was an ever-present fixture at all of his children’s extra-curricular sporting and cheer events. He was also a member of the Dana Quarter Century Club where he served as President and as Assistant Chaplain and Chaplain. In addition, he was also a member of T.D.R.A., Toledo Area Dana’s Retirement Association where he also served as Chaplain. He received Man of the Year award for outstanding service to Third Baptist Church (2007). In 1980 Leslie joined First Antioch Baptist Church (Church of Christ), as one of the founding members, under the Pastorship of Rev. Dr. H. Clark Nabrit. He served as Asst. Treasurer until he left to go back to his home church Third Baptist. Leslie served on the Deacon Board and the Usher Board, where he was past Chief Usher and Captain/Chaplain. Leslie later met and married Alice Sparks Allen at Third and they enjoyed worshipping the Lord together. He has also ministered as a Sunday School teacher for the men’s class and later became the teacher for the Mens & Womens classes. Leslie Sr. was above all else, an outstanding and loving Father, Grandfather and Husband. He was also an avid sports fan and a loyal supporter of the Cleveland Cavaliers, Cleveland Indians and his beloved Cleveland Browns. Leslie was preceded in passing by his parents Billie and Nycola Courts and brother Billie Demoy Courts. Leslie and Alice enjoyed traveling around the country together and experiencing new adventures. Leslie’s love of his life Alice (Sparks) has preceded him in passing early December, 2020. Together, Leslie and Alice had 5 children (one deceased) and 11 Grand Children (with one more on the way) and 7 Great Grandchildren. Surviving are his sons Leslie W. Courts Jr., Michael A. (Adriana) Courts, (West Linn, OR). Daughters DeLisa J. Courts (Columbus, OH), and Carlotta Jackson. Other children Kathleen Matlock (deceased), Neail Goodloe III,. Grandchildren Keiyona Jackson, Demil Courts, Leslie I. Courts, Cameron Courts, Tyrese Courts, Tyreona Courts, Addison Courts, Austin Warner Courts, Mychal Matlock, Neail Goodloe IV, Jonathan Goodloe. Great grandchildren John White III, Michael Matlock Joyce, Larry Harris Jr., Aleyah Hawkins, Alexah N. Courts, Lesley, I Courts, Shayne A. Goodloe.

The family of Leslie W. Courts created this Life Tributes page to make it easy to share your memories.

Send flowers to the Courts family.