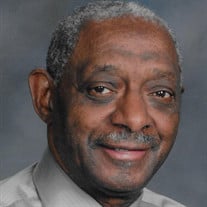 Lawrence Clifton Shoto “Larry” died unexpectedly on July 12, 2017 in Toledo, Ohio at the age of 83. Larry is survived by his wife, Dorothy France Shoto, of Toledo, Ohio; his daughter, Lorraine C. Shoto, of Chicago, Illinois; sister-in-law Alberta Shoto, of Jackson, Mississippi; and dearly loved nieces, nephews and step-children. Larry was born on September 25, 1933 in Jackson, Mississippi, to Henry R. Shoto and Hester Tennon Shoto. Larry graduated from Jackson State University in 1959 with a Bachelor of Arts degree, and from Eastern Michigan University in 1974 with a Master of Science degree. Larry worked as a school teacher and coach for 31 years, including in the Spencer Sharples Local School District, where he was a beloved and winning basketball coach. In Toledo Public Schools, Larry taught science and coached basketball and track and field until his retirement in 1992. Larry and late wife, Ethel Matten Shoto, were married for 36 years, until her death in 2003. Their only daughter, Lorraine C. Shoto, is an attorney in Chicago, Illinois. In 2014, Larry re-married to Dorothy France Shoto, formerly of Detroit, Michigan. Larry was a member of Third Baptist Church, where he served as a Deacon and usher. Larry also shared his talent for singing as a long-time member of both his church choir and Toledo’s David Carter Symphonic Choir. He was a Life Member of the Alpha Xi Lambda Chapter of Alpha Phi Alpha Fraternity, Inc. Until the time of his death Larry was an active volunteer at Alpha Towers Senior Housing. Visitation is scheduled for Wednesday, July 19, 2017 at Dale-Riggs Funeral Home from 5:00 - 8:00 p.m., wake services 10:00 a.m. on Thursday, July 20, 2017 at Third Baptist Church, immediately followed by funeral services at 11:00 a.m., Rev. Dr. K. David Johnson pastor, interment Forest Cemetery. All are welcome to attend and celebrate Larry's life. Condolences can be sent to (URL).

The family of Lawrence Clifton Shoto "Larry" created this Life Tributes page to make it easy to share your memories.