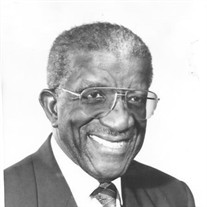 Dr. Joseph C. Sommerville - former Chairman of the Department of Educational Leadership and Professor Emeritus at The University of Toledo, peacefully left this earthly life on Sunday March 15th. He was a noted and beloved educator, author, counselor and mentor to countless individuals throughout a lifetime of service to his community and the greater world. Dr. Sommerville was born in Birmingham, Alabama on December 28th, 1926. He attended the then segregated Parker High School and upon his graduation continued his studies at Morehouse College. His academic career was interrupted by a stint in the U.S. Army where he served honorably as a supply sergeant stationed in Germany at the end of World War II. He returned from the service in 1947 to complete his undergraduate studies at Morehouse and received his bachelors degree from Morehouse in 1949. He began his career as an educator teaching at his alma mater Parker High School in Birmingham. Never one to rest on his laurels, he took up his graduate studies at The University of Michigan. It was there that he met his wife of 57 years, Mattie C. Sommerville who preceded him in death in 2013. Their union produced two sons, Joseph Jr. (Joey) and Barry. Dr. Sommerville eventually earned four graduate degrees from U of M, culminating with his Ph.D. in 1969. His lengthy career included service in the Birmingham, Alabama and Inkster, Michigan School Systems. He also was an active leader in numerous organizations including The Inkster Federation of Teachers, Dearborn-Inkster Human Relations Council and Wayne County Schools (Detroit). After his retirement from U of T, he continued his 23 years of service on the Toledo Lucas County Library Board of Trustees, including two terms as President of the Board. In 1996, he was selected as the first state president of the AARP of Ohio. He was the recipient of many honors throughout his career. He was honored as a living legend by the African American Legacy Project in 2013. A scholarship was named in his honor by the Association of Black Faculty and Staff at The University of Toledo in 2016. In 2019, the Omega Psi Phi Fraternity named an annual golf tournament in his honor. Dr. Sommerville was blissfully happy in his twilight years, in part thanks to the love and care of his wife, Olivia Curbeam Newby Sommerville. He was a longtime member of St. Paul Missionary Baptist Church serving in numerous leadership roles including Deacon Emeritus. He was a proud member of Omega Psi Phi Fraternity and Sigma Pi Phi Fraternity (The Boulé). He is survived by his wife Olivia, sons Joey and Barry, stepsons Kevin and Shaun Newby, their respective spouses and children. He was preceded in death by his beloved granddaughter Dani Sommerville. Dr. Sommerville’s enduring legacy lives on through the positive impact he had on the many people he touched throughout his exemplary life. Due to the current public health crisis, a memorial celebration for Dr. Sommerville will be announced at a later date. Arrangements entrusted to Dale-Riggs Funeral Home. www.dalefh.com

Dr. Joseph C. Sommerville - former Chairman of the Department of Educational Leadership and Professor Emeritus at The University of Toledo, peacefully left this earthly life on Sunday March 15th. He was a noted and beloved educator, author,... View Obituary & Service Information

The family of Dr. Joseph C. Sommerville created this Life Tributes page to make it easy to share your memories.

Send flowers to the Sommerville family.