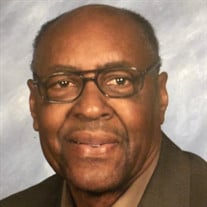 John Rambus was born February 15, 1936 in Ruleville (Sunflower County), Mississippi to James and Mary Bell Rambus who preceded him in death. He passed away on Saturday, May 2nd, 2020 at SKLD Nursing Home. John Graduated from Libbey High School and attended the University of Toledo with interest in Business. John accepted Jesus Christ as his personal Savior at an early age and was a member of Mt. Pilgrim Baptist Church for over 60 years where he held many positions such as Deacon Board, Sunday School Teacher and Superintendent of Sunday School and was a member of the Men’s Chorus. John was united in marriage with Annie D. (Jackson) Rambus who preceded him in death after 38 years of marriage. John had many accomplishments in life and held several positions at Horton’s Elevator, Service Combustion, O-I Building, Dale’s Funeral Home, but the one that he held dearest in life was entrepreneur of the Royal Knight’s Men’s Shoppe which opened in 1968, with Otis Jones, Robert Sawyer, Ralph McFarland, Wilmot Barnes, Jr, David Parker, Kenneth Marney and Theodore Banks. John enjoyed watching basketball, it didn’t matter whether it was college or professional, along with reading the Bible and listening to “Good Gospel Music”. John never met a stranger. John leaves to cherish his memory, daughter, Corlando Haskins (Companion Tyrone Miller, whom John loved as a son) of Muncie, IN, a son John Jackson, Sr. of OH, three grandchildren, Joseph Haskins, III, Joshua Haskins of Muncie, IN and John Franklin Jackson, Jr. of Toledo, OH, two great granddaughters, Jha’Nyah and Jordyn Strong. One Sister Daisy (James) Murphy of Toledo, OH. A Host of nieces, nephews, cousins and friends. Special Friend: Homer Jackson and God Son, Theodore “Teddy” Banks, Jr. In addition to his parents and the love of his life, Annie Rambus, he was preceded in death by sisters Lucy Townsend, and Jamesola Lockett.

John Rambus was born February 15, 1936 in Ruleville (Sunflower County), Mississippi to James and Mary Bell Rambus who preceded him in death. He passed away on Saturday, May 2nd, 2020 at SKLD Nursing Home. John Graduated from Libbey High School... View Obituary & Service Information

The family of John Edward Rambus created this Life Tributes page to make it easy to share your memories.

Send flowers to the Rambus family.