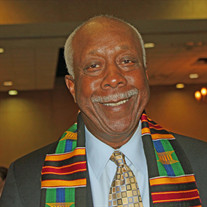 John C. Moore passed away Friday, July 20, 2018. A resident of Holland, Ohio, he was 82. He was born July 5, 1936 in Toledo, Ohio to the late Vera and Samuel Moore and attended elementary and junior high school in Toledo. He spent his high school years in Arkansas, returning to Toledo in 1954 after graduation. He married the late Alvetta Moore in 1955 and began working as a general laborer while attending night school at the University of Toledo where he obtained his bachelor’s degree in 1978. After starting as a stock clerk and janitor at the Toledo Trust Corp., he was promoted 19 times and retired as VP of the then Society Bank and Trust in 1990. He later became an administrator at Bowling Green State University and retired from there in 1998. After retirement, he increased his volunteerism tremendously, served as a consultant for several organizations, and authored four books, one of which will be published posthumously. In 2000 he was appointed as a trustee of Owens Community College and later served as chairman. He also served on the Ohio Association of Community Colleges board, of Hospice of Northwest Ohio, African American Legacy Project of Northwest Ohio, Boys & Girls Club of Toledo and “the list goes on and on” and he would often say. He was a fraternity member of the Alpha Phi Boule, Toledo Chapter of Sigma Pi Phi. He received numerous awards and accolades for his civic duty, and especially for his commitment to education and disadvantaged youth. Both parents, his wife, Alvetta, a daughter, Cathy, and a grandson, Abdul-Bayyan, and two siblings preceded him in death. Surviving are his sons Kevin Braswell and Howard “Ric” Moore; daughter, Audrey Madyun; brother, Robert Moore; 10 grandchildren, and 19 great-grandchildren. A wake will be from 4-7 p.m. Friday in the Dale-Riggs Funeral Home. Funeral services will be at 11 a.m. Saturday at St. Joan of Arc Church, where he was a member. Memorials may be made to the Cathy Y. Moore Scholarship Fund c/o the Toledo Community Foundation or Hospice of Northwest Ohio. 

The family of John C Moore created this Life Tributes page to make it easy to share your memories.

Send flowers to the Moore family.