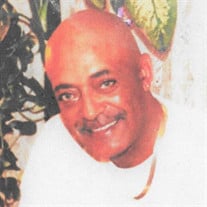 John Eddie “Joe” Derden, passed away at the age of 75 in his home on Saturday, April 11, 2020. John was born on July 4, 1944 to the union of Earl Derden and Hazle (Oliver) Derden in Grenada, MS. John, affectionately known as Joe by his family and friends, relocated from Grenada where he and his brother Robert lived in Chicago for a few years before settling down in Toledo, Ohio. Joe retired from Ford Motor Company after working for thirty –five years, he worked in many capacities at Ford but retired as an Inspector. Joe loved to fish and you could often find him on what he called the Sandy Beaches of Swan Creek. He really enjoyed having his family and friends over for the Derden’s backyard BBQs and Fish Fry's. Joe had a love for music and dance. You could always find him on the dance floor kicking out his right foot and swinging his left arm to the music. He also had some of the most clever saying such as “Keep a Level and Steady Head” or calling his great nephews little weedy whoppers and more. Joe was preceded in death by his Father, Earl Derden; Mother, Hazle Derden; Brothers, Walter Derden, Robert Earl Derden and Maloid Derden; Sister, Dorothy Ann Derden and Grandson Joshua Willis. He leaves to cherish his memory sons, Joey Derden and Armond Wright; daughters, Connie “Latanza” Derden, Christy Freelove and Daphne Derden Willis; sister, Barbara Ann Derden and his many grandchildren. He also leaves to cherish his memory special nieces and nephews, Vyrelle Derden Winfree, Monica Derden Brown, Jeff Myers and Robert Derden Jr, in addition to his goddaughter Derry Reynolds, special friends Margaret and Pam and other nieces, nephews, cousins, and friends. Visitation will be Sunday, April 19, 2020 from 2-4:00 p.m. with funeral service to follow at 4:00 p.m. Dale-Riggs Funeral Home Chapel, Rev. Roger Carson officiant, interment Forest Cemetery.

The family of John E. Derden created this Life Tributes page to make it easy to share your memories.

Send flowers to the Derden family.