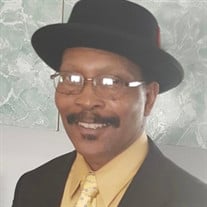 Jimmy Allen Smith (PawPaw, Jim Allen, Pastor Jimmy) was born January 30, 1953 in Stockton, California to Jimmy Lee and Jerestine Smith. He attended Bearden High School and he worshiped at Bearden Church of God in Christ, where the Pastor was Superintendent Donnie Aaron, and his mother, Jerestine, was the church mother until her passing. Pastor Jimmy taught Sunday school, lead worship service, and served on the Deacon Board. God had such a calling on his life and he was saved at the age of 21 under Pastor Aaron, and began preaching 3 months later. Serving a short time as Assistant Pastor of Bearden Church of God in Christ, he also worked Full-Time at Georgia Pacific, and started his own crafting/sewing business, where he crafted baby bibs, Christmas Stockings, and other items. During this time, he was called to start his own church, becoming founder and Pastor of New St. Bethany Church of God in Christ. Pastor Jimmy and his family moved to Toledo, Ohio in the late 1990's. While in Toledo, he worked for Toledo Blade for 17 years and retired. He served as Assistant Pastor at Emmanual Church of God in Christ, and held positions as District Sunday school Superintendent and Finance Secretary for 12 years. Pastor Jimmy, then founded Divine Mission Church of God in Christ, where he pastored for 13 years until his passing. He worked tirelessly and genuinely to help those who were blessed to come in contact with him. Pastor Jimmy, was a man who loved life and loved his family. His wife, of 36 years, Sister Bertha Smith, has faithfully worked along side him to carry out God's word and help raise his children. He is the father to three sons, two daughters, one step-son, and one step-daughter. Philandus Rideout, Roderick Smith(Melinda Smith), Crystal Brown(CharMar Brown), Monica Loveland, Joshua Smith, Jerome Carroll, and Jeanette Carroll. Pastor Jimmy is preceded in death by his parents, Jimmy Lee Smith and Mother Jerestine Smith, Brother, Elder Donald Wayne Smith, brother in law, Charles Jeffers, and son-in-law Jason Loveland. Pastor Jimmy's bright smile, calming demeanor, and welcoming personality made it very easy for everyone to love him. He brought positivity everywhere he went. He was loved immensely by every one he touched. Pastor Jimmy is survived by his wife, Sister Bertha Smith, and his 5 children and 2 step-children, mentioned above. Also, his five sisters, Carolyn Benson(Gary Benson), Martha Aaron, Ruby Jeffers, Cynthia Thompson(Donald Thompson), Pamela Davis(Seven Davis), and his two brothers, Richard Smith(Eliza Smith), and Marcus Smith. A host of grandchildren, and great-grandchildren, whom he loved and cherished. Also his faithful Divine Mission COGIC members, and a host of nieces, nephews, cousins, family, and friends.

Jimmy Allen Smith (PawPaw, Jim Allen, Pastor Jimmy) was born January 30, 1953 in Stockton, California to Jimmy Lee and Jerestine Smith. He attended Bearden High School and he worshiped at Bearden Church of God in Christ, where the Pastor was... View Obituary & Service Information

The family of Jimmy Allen Smith created this Life Tributes page to make it easy to share your memories.

Send flowers to the Smith family.