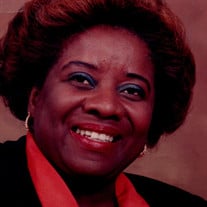 Jean Ellen Sneed, age 81, passed her earthly life on April 16, 2021 at Heartland of Sylvania in Sylvania, Ohio. She was born October 11, 1939 in Toledo, Ohio. She was the first daughter of the late John and Lillie Sneed. She began her academic education in the Toledo Public School system at Washington Elementary School. Her academic education continued at Robinson Junior High School. In those years of public education, the focus was on individual ability and achievement, and the placement of students in class environments to maximize that potential. Jean did that at Robinson Junior High and was awarded for her achievement by the school administration. She and other honor students were taken on a special trip to see, what is now a classic film, Quo Vadis. After Robinson Junior High School, Jean began her high school years at Scott High School. She was a 1957 Jesup W. Scott High School graduate. While a student at Scott, Jean was a member of Junior Achievement. This program was offered to high school students on an after-school basis. In its initial incarnation, the program allowed groups of students, overseen by an adult advisor, to create a business plan, solicit investments from local businesses, obtain raw materials and manufacture products. Exploring her musical talent at Scott, Jean formed a girl song group with three classmates. They called themselves The Sparkles. They appeared in the school’s annual musical revue for the year 1956 titled: Scott Skits: Syncopated Village. They sang Eddie My Love. Their rendition was well received by the audience. The song was a popular hit record and commercial success by the Teen Queens. Jean’s first education began at home. Her parents emphasized education as an avenue for success. She watched and absorbed her mother’s home economic skills; her father’s mechanical abilities for repairing the simplest to complex devices. Jean emulated both parents’ work ethic. John Sneed raised his children to be productive individuals, assets to their community. Following her parents’ suggestion, Jean began taking piano lessons from a neighborhood piano teacher as did her two brothers. Of the three, Jean and her older brother Melvin became credible pianists. Melvin became a professional jazz pianist, while Jean modestly referred to her piano playing as a hobby. She continued her musical development at the Bach Conservatory of Music studying piano and voice, eventually including organist as part of her musical skills. Jean’s religious education began at Mount Zion Missionary Baptist Church under the pastorate of the late Reverend Elijah Benton. She sang in the Young People’s Choir under the musical directions of the late Anna Bolden and Lottie Vinson. With her Christian faith intact, Jean entered the adult workplace as a nurse’s aide at Mercy Hospital. Her second employment was as a telephone operator with the Bell Telephone Company. After relocating to Los Angeles, California in the 1960’s, Jean continued her career in telecommunications with Pacific Bell. Pacific Bell became Bell South which became American Telegraph and Telephone Company. Jean retired in 1997 as an Operation Administrator after forty years of service. In Los Angeles, Jean was an active and supportive church member of Greater Page Church of God in Christ under the leadership of the late Elder Lucius Page and Elder Cleophus Johnson. She sang in the Gospel Choir. When it was announced that a Hollywood movie production company wanted to use the church’s facilities and gospel choir to film some scenes for the movie Bulworth, Jean was elated. The movie’s lead actors, Warren Beatty and Halle Berry, would be in the church scenes. The production company stipulated that the church’s choir needed more male members before they would proceed. Jean and other choir members recruited a sufficient amount of males for the church choir scenes. However, in the released version of the movie, the choir scenes where Jean and most choir members sat were cut and the choir singing was dubbed from another source. Jean was compensated as a singer-extra for a role in a movie that she didn’t appear in the final 1998 version. Alas, the ironies in one’s life. After over fifty years of experiences and friendships in Los Angeles, circumstances and declining health dictated that Jean would have to return to the city of her birth; a city that held precious memories of her youth and family members. Jean was predeceased by her parents John and Lillie Sneed; brother, Melvin Sneed; sister, Margie G.J. Graham; nephew, Robert H. Jordan Jr.; and niece, Tonyia Jor’Dan. Jean is survived by sister, Janis L. Deahl, Toledo, OH; brother, Abdullahi I. Bin-Yahya, Toledo, OH, goddaughter, Terri McKibbon, Los Angeles, CA; first cousins, Jeanette Lively, Toledo, Oh; Albertah Banks, Columbus, OH; Rose Wiggins, Inkster, MI; Betty Love, Dyersburg, TN; Regina Ewing, Toledo, OH; Marcia Lloyd, Chicago, IL; Renee Lott, Buena Park, CA; Annie Moore, Nashville, TN; Albert Richardson Jr., Toledo, OH; John Richardson, Toledo, OH; Eugene Oliver Sr., Toledo, OH; Gary Sneed, Toledo, Oh; James Sneed, Toledo, OH; other family members and family friends.

Jean Ellen Sneed, age 81, passed her earthly life on April 16, 2021 at Heartland of Sylvania in Sylvania, Ohio. She was born October 11, 1939 in Toledo, Ohio. She was the first daughter of the late John and Lillie Sneed. She began her academic... View Obituary & Service Information

The family of Jean E. Sneed created this Life Tributes page to make it easy to share your memories.

Send flowers to the Sneed family.