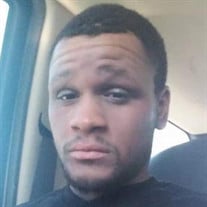 Jawuan Jacquis Darrington was born on March 22,1993 in Toledo,Oh to Tanya Foster and Marcus Darrington IV. Jawuan left us to soon, his light was taken on February 26, 2021 at St. Vincent Hospital. Jawuan attended Rogers High School in Toledo,Oh where he made many friends that he kept in contact with. Though not a regular churchgoer, Jawuan was a firm believer in Christ and his teachings. Jawuan was a loving and devoted father, a caring son, brother and friend. Jawuan loved his children more than all the stars in the sky and was rarely without them. Known to his friends as "Wonnie" Jawuan loved hanging out with family and friends and really enjoyed playing video games. The bond that Jawuan shared with his mom was very special to him, she cared for him during his many bouts with illness. Jawuan also made sure to spend time with his dad. According to his dad, Jawuan still could never beat him playing dominoes. You could sometimes find JuanJ, as he was called by his granny Kitty, hanging out with her at the casino. All who knew Jawuan knows he was a good guy, a quiet soul that was sweet and loveable beyond measure and could always be counted on if you needed him. Jawuan was preceded in death by his great-grandparents: Henry and Louise Ooten, Marcus Darrington Jr. and Vera Darrington. Grandparents: Jeweline Foster, Vincent Stasher Sr. and Marcus Darrington III. Jawuan leaves to cherish his memory, his parents; Tanya Foster and Marcus Darrington IV; grandmother Beatrice Patterson(Kitty); his children, Jawuan, Ja'Kiyah and Ja'Kobe Darrington; his girlfriend and the mother of his children, Destinee Miller; brothers, De'Quan and Omarion Darrington' sisters, Diamond Darrington, Meshaunda Davidson, TyLeisha and Tamera McNair. A special uncle, Maurice Patterson. Honorary Step-father, Jerome McNair;special cousins, Cornelious and Carnelle Oliver; and a host of other nieces, nephews, aunts, uncles, cousins and friends whose lives are better for having known him.

The family of Jawuan J. Darrington created this Life Tributes page to make it easy to share your memories.

Send flowers to the Darrington family.