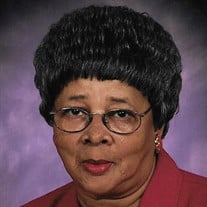 Jannie L. Bester 82, passed away May 24, 2016, at Laurels of Toledo Nursing Home, surrounded by her loving family. Born in Parkin, AR, she moved to Toledo in 1947. A 1951 graduate of Libbey High School, she was a faithful member of Warren A.M.E.... View Obituary & Service Information

The family of Jannie L. Bester created this Life Tributes page to make it easy to share your memories.

Send flowers to the Bester family.