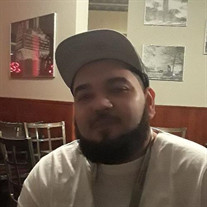 James Martin Squier Jr. was born May 27, 1989 to James and Keshia Squier in Chula Vista, California. James grew up in Beloit, Wisconsin. It was at Beloit Memorial High School where he formed his life long friends D and Tyrone Womack. James moved to Toledo, Ohio in 2006 where he attended Glass City Academy. He worked at West Park Place as a dishwasher and cook for 7 years gaining a work family that he grew to love and they loved him. James started working for Toledo Hollywood Casino in the Environmental Services Department. He spoke highly of his co-workers and new found friendships. James was a spiritual and God fearing man who had a way with his words. He touched many peoples lives. James love was fishing. He would love going down to the water by himself and just fish all day from sunrise to sunset. He also liked listening to all kinds of music and watching movies that made him laugh. James was a gentle giant and will be missed greatly by all family and friends. James was preceded in death by brother Tyren Squier and paternal grandmother Phyillis Wessels and maternal grandfather Jamie L. Jones Sr. James leaves to mourn his mother and father James Sr., and Keshia Squier of Toledo, OH; siblings Steve and Quanteshia Willis, Doniqua Squier, Essence Jones, Jaire Perkins, Zanerra Jones, of Toledo, OH; maternal grandmother Karen Dubose; great grandmother Clara Burton of Toledo, OH., and Betty Dubose of Fostoria, OH., and a host of aunts and uncles, Jacqueline Jones, Jamie and Marlana Jones, Nikee Burton, Gary Dubose, Michael Burton and Yavonda Pullom and a host of nieces and nephews, other relatives and friends. Visitation will be Friday, February 14, 2020 from 2-4:00 p.m. followed by funeral service 4:00 p.m. at Dale-Riggs Funeral Home Chapel, pastor Michael Burton officiant. Interment will be private.

James Martin Squier Jr. was born May 27, 1989 to James and Keshia Squier in Chula Vista, California. James grew up in Beloit, Wisconsin. It was at Beloit Memorial High School where he formed his life long friends D and Tyrone Womack. James... View Obituary & Service Information

The family of James Martin Squier Jr. created this Life Tributes page to make it easy to share your memories.

Send flowers to the Squier family.